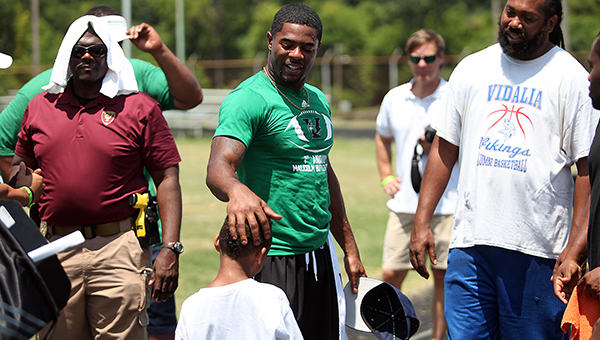 Malcolm Butler might have one of the most outstanding plays in Patriots Super Bowl history. His game-winning interception at the goal line against the Seattle Seahawks has launched his name into new heights in the sports world.

“I really didn’t know what was going on,” Butler said. “It was a lot of things going on at one time. I’m getting pulled here, pulled there, teammates crying and I’m on the biggest stage of my life. It took a couple of days to get the feeling, but it was a great feeling.”

Butler had a busy week being in Los Angeles for the 2015 ESPY Awards and the Nickelodeon Kids’ Choice Sports Awards before returning home to host his inaugural football camp at Vicksburg High School.

A little over 200 children came to Memorial Stadium to be instructed by Butler, VHS football coaches and players.

After Butler addressed the children, they broke off into grade-based groups to begin the camp. VHS football players demonstrated different types of stretches such as high knees pulls and Saigon squats.

Butler said he was going to put on the camp regardless of his iconic play in the Super Bowl.

“You always got to do something for your hometown, that’s common sense,” Butler said. “If I didn’t do that, it would have shown less character of me.”

Children enjoyed themselves working on drills for receiving, speed and agility, explosiveness and footwork.

The older campers took part in seven-on-seven drills, which were taken seriously and played with some intensity.

Malik Sims made big plays in his seven-on-seven game that got spectators riled up.

“I feel excited about that and I can’t believe it,” Sims said.

Sims enjoyed working on the different footwork and agility drills and feels blessed to have learned from Butler. He plays for Warren Central and will use what he learned at camp to make him a better player. Sims said the footwork drills would help him quicker on the field.

Parents jumped quickly on the opportunity to have their children participate in the camp. Tameka Johnson signed her son Josh up as soon as she heard about the camp.

Johnson and her mother Bernice Murphy wanted their child to develop great personality skills from the camp.

“Character, leadership and a strong work ethic to help him develop those skills,” Johnson said.

“Confidence, because he really hasn’t been involved in sports and a lot of activities so we’re trying to build his character,” Murphy said.

Johnson said Josh was a little nervous but saw him become more confident, be humble and fit in with other children. Murphy said when parents present new things to children they are reluctant and she hopes her grandson’s interest in football will grow.

Josh’s favorite part of the camp was running with the parachutes and learning how to be quick. He is a fan of Butler and enjoyed the camp.

Thelma Hossley used to be a cafeteria worker and fed Butler when he was in school. She immediately enrolled her grandson in the camp, hoping he becomes more active.

“He talked to Malcolm several times on the field and I’m hoping that enthuses him to want to play football,” Hossley said.

The children had the opportunity to ask Butler questions at the end of the camp, most of which were about the Super Bowl and going back to Popeye’s.

Butler addressed the campers with a message of listening to their parents and teachers, making life decisions and the friends they hang around with.

“Listen to your parents, they’ve done every trick you try to pull,” Butler said. “Surround yourself with good people. Try not to be on your teacher’s bad side because it ruins your reputation.”

Butler wanted the kids to leave the camp with confidence and to believe they can do anything they want to do.

“I stayed on Drummond St. I stayed here, just like you and I’m here, just like you,” Butler said. “I went to Vicksburg High School, no different than Warren Central. We’re all one at the end of the day. You can do it, I’m a living testimony to it.”

The success of the camp is credited to Cynthia Bell, who worked diligently to put the camp together and get the word out.

“Given the heat and the kids we’re trying to make sure they stay hydrated so they can move forward,” Bell said.

Bell said there was a camper with Cerebral Palsy and said he was happy to be there.

Campers were star struck when they got a chance to interact with Butler.

“The see themselves in him future wise and he sees himself in them when he was there age. It’s a win-win situation.”

Bell is appreciative of her sponsors and everyone who came to participate in the inaugural camp.

“We will do this again.”

It’s never too late to register to vote

The deadline to register to vote for the upcoming primary election has passed, but Warren County Circuit Clerk Jan Daigre... read more