The achievements of Jay Hopson range from being a four-time letterman and academic All-Southeastern Conference honor roll selection at Ole Miss, to being the first white head coach in the Southwestern Athletic Conference.

Hopson spoke to the Port City Kiwanis Club last week and reminisced on his time spent at Alcorn State. He inherited a meager football program when he took the position in 2012 and has turned it into the defending conference champion. The Braves were also picked to win the SWAC at this year’s league media day.

“I don’t know if you remember my first year at Alcorn, we were a really bad football team. Ain’t no way to put it,” Hopson said. “I know my dad came to practice and he left after 30 minutes. He said ‘God bless you son, it’s going to be a long haul.’” 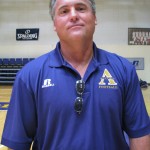 The Vicksburg native coached at 10 universities including Tulane, LSU, Southern Miss, Ole Miss and Michigan before taking the Alcorn position. He’s been a part of several conference championship teams and had records ranging from 15 wins to one.

When Hopson took the job at Alcorn he knew it would be a difficult task without a lot of help and support from the community and people like Billy Crozier and his father Briggs.

“It’s a ‘we’ journey not a ‘me’ journey. There’s no way physically possible that Jay Hopson can come down here and win a lot of games without a ‘we’ concept,” Hopson said. “I can’t tell you how much the guys in this community have meant to our program.”

Through donations the program was slowly able to move in the right direction. However, by the time Christmas came around, Hopson was out of money.

Crozier, general manager for Cannon Toyota, donated several cars to the program and Hopson credits that and his first signing class as a huge part of his success later on.

“Without help, you don’t get it done. People in this community stepped up to get it done and I can’t tell you how I appreciate what you’ve done for our program,” Hopson said.

Hopson didn’t have a complete set of uniforms for his players and remembers being told they might not be ready for the 2012 season opener against Grambling.

The Braves got their jerseys the day before the game, only after fighting through inclement weather and tipping a FedEx delivery person $500 to drive through hurricane conditions.

Alcorn defeated Grambling, the defending SWAC champions, 22-21 with only three weeks of practice.

Hopson had a negative budget in the second season and the team needed new shoulder pads. Braves alumni came into the dressing rooms to look at conditions and said something needs to be done.

The road to being the Braves head coach almost didn’t happen.

The university personally contacted Hopson for the position and he was among the four called back for an interview. Hopson discussed salary, staff, contracts and budgets with the university but felt uneasy taking the job.

He went back to Memphis for two weeks before being badgered with phone calls from people close to Alcorn and the program to interview again. Hopson went back to Alcorn for a second interview on the night of Mother’s Day.

“I remember driving down the stretch and thinking ‘I’m just not going to take it,’” Hopson said. “I remember that church in Port Gibson and I parked right there, but it was almost like you heard ‘take the job.’ I left the light and told Dr. Brown I’ll take the challenge.”

Hopson has signed players who’ve turned down offers from West Virginia, Arkansas State, South Florida and Wake Forest to be a Brave.

“There’s some guys here we’re certainly hoping will make a difference at Alcorn State for years to come,” Hopson said.

In Warren County Circuit Court for the week ending July 24:

• Roderick Mashun Davis, 31, 1719 Military Ave., pleaded guilty to sale of a controlled substance and was sentenced by... read more