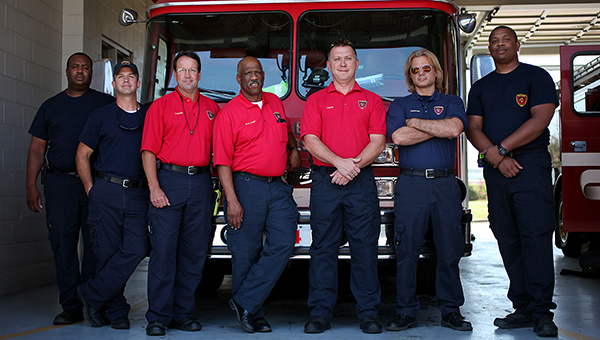 It’s been a blazing hot summer in Vicksburg, but one shift of the city’s fire department can’t seem to catch a break to cool off.

Since early July, firefighters on Vicksburg Fire Departments’ C Shift have extinguished four major structure fires, a rarity for a single shift in an age when far fewer homes burn down.

“As long as I’ve been doing this, I don’t think we’ve been through a streak like this,” said Assistant Chief Henry Williams, a 37-year-veteran of the department.

All four fires began in the heat of the day — between noon and 4 p.m. — meaning firefighters in already scorching hot temperatures got dressed in heavy protective gear and rushed headlong into fires an average of 1,100 degrees.

“It’s been intense,” said Capt. Sam Brocato. “It’s not like something burned up in an outlet and burned up one room. These are major fires.”

Fires in the middle of a summertime day tend to burn longer and hotter before they are noticed, he said.

“There’s not a lot of people outside, so it takes someone hearing popping or a neighboring house to catch fire for someone to notice. By then it’s too late,” he said.

One of hottest fires was July 18 on Second Street. Temperatures approached 1,300 degrees as the fire reached a flashover, the point at which all combustible material inside begins to burn simultaneously.

“We had to search for a window and dive out,” Brocato said.

The cause of that fire is believed to be electrical.

The streak of fires began July 6 with an arson fire at 805 Fourth North St., the home of accused drug dealer Derrick “DT” Thomas, who was arrested earlier this year in a long-term undercover narcotics investigation, Brocato said.

Nine days later, a child caught a couch on fire at an apartment complex on Hayes Street.

The blaze caused thick, heavy toxic smoke to fill much of the complex, Brocato said.

“The mother was in the kitchen cooking and didn’t smell the smoke until it was too late. She had just enough time to get out with the kids.”

On the next C Shift, firefighters battled the Second Street blaze. After a few shifts without a fire, a home at 2609 Grant Street caught fire about noon Aug. 5. It was the hottest of the five fires.

“We didn’t even try to go in because it was burning so hot,” Brocato said.

When the Grant Street fire sparked, Pvt. A.J. Taylor had been on duty for about five hours, ever. It was Taylor’s first day on the department.

“It was pretty hardcore and interesting,” said Taylor who lives in Port Gibson.

The heat on Grant Street was intense as firefighters worked 41/2 hours to extinguish the blaze.

“It’s like cooking. You might have the AC on but when you get in the kitchen, you start to sweat,” Taylor said of being close to the fire. “You get overwhelmed and exhausted. I noticed that immediately.”

To prevent heat illness, crews of firefighters rotate in every 15 minutes, Williams said.

“With the gear they’ve got on and the heat, they can become overheated so quickly,” Williams said.

During breaks, firefighters drenched in sweat drink water and typically get close to the ground to cool off. But preparation for the heat begins every morning when they come on shift.

“I tell them to drink plenty of water and be pre-hydrated,” Brocato said.

Two mothers with a love for music and children are bringing something new to town, Kindermusik. Kindermusik provides music and... read more