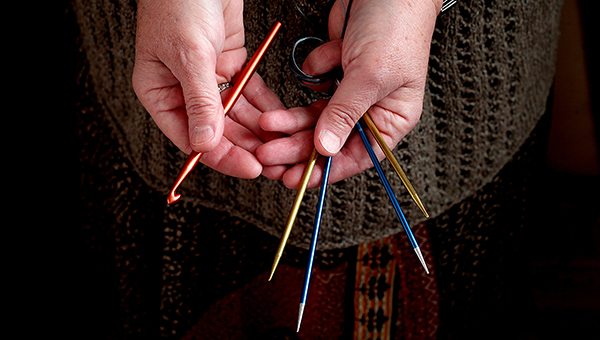 Since she was a little girl, knitting has fascinated Brenda Harrower and she’s enjoyed dabbling in the hobby for the past 55 years.

One day, Harrower stumbled across her mother while she was knitting, and as most children, became curious to see what her mother was doing. As she grew older Harrower learned from her mother more difficult techniques.

“It was a natural thing and she taught me most everything I know about knitting,” Harrower said. “I remember being in junior high when she taught me a couple of little tricks, like turning cables and sewing up seams right.”

To knit a cable means to cross one group of stitches over another and sewing up seams is when the different items knitted are sewn together.

Because of the advanced knowledge Harrower possessed, she began teaching 4H students how to knit while in junior high. She found the experience of teaching her peers to be fun since most of them were unaware of her ability to knit.

Her students were receptive to her teachings. Their eyes would grow wide in amazement when she would tell them how they weren’t doing things quite right and proceed to instruct them in an easier way. She still has girlfriends who thank her for teaching her the craft.

Harrower and her husband, Mike, put on the local fiber festival in Vicksburg and have done so for the past three years. They bring in different vendors who cover the range of yarns and supplies. Vendors teach a variety of classes at the festival including spinning, weaving, knitting, dying and crocheting.

“We thought that was really good for our first year and it really was. The second year, we nearly tripled our foot traffic and were able to squeeze in a few more vendors,” Harrower said.

The most recent festival was moved to the Vicksburg Convention Center and was filled with 27 vendors, 30 different classes taught and approximately 1,000 people attended.

Harrower enjoys talking to people at the festival and sharing with them the history of colors. She has a vat called “southwestern,” which is a mixture of turquoise, coral and gold.

“You see it and you automatically think of the southwest U.S. I came up with the name for it first and developed the colors. For others, I develop the colors first then develop the name,” Harrower said.

She has received nothing but positive feedback for her pieces and the reaction from people who’ve bought her garments makes her feel appreciated.

For someone willing to learn, Harrower teaches knitting at the Vicksburg senior center on Wednesday afternoons in two sessions. She can teach casting on and knitting the first session and let her students spend a week practicing the techniques learned from her, and finish up with purling.

Purling is a bit more difficult to learn than the standard knit stitch because it’s a three-step process.

“One is reverse of the other. Purling is just learning how to do it backwards.” Harrower said. “Once you learn that you can take off and go from there.”

Harrower holds her yarn in her left hand, which is called continental knitting. Those who hold the yarn in their right hand use the American style. When she’s teaching someone with a background in crocheting, she likes to teach continental because they’re already accustomed to holding yarn in their left hand.

Using the continental style has prevented any arthritis from developing in her hands. She has seen people who use American style get arthritis because of the amount of action used with the style.

“They have to wear gloves to support the hand and they have to wear those when they knit,” Harrower said. “Rarely have I seen anyone who continental style knits have arthritis in their hand.”

Knitting is relaxing to Harrower and at times she finds herself falling asleep in the process. At the same time, she gets a thrill out of producing pieces. She doesn’t enjoy having idle hands so she’s either spinning or knitting.

Harrower also has trouble putting down a project once she begins.

“Once you get going with it, each stitch just calls for more. The most difficult stitches to me are the color changes, where you’re painting pictures with your knitting and then the fair aisle behind that.”

She loves big projects and enjoys making sweaters the most. Harrower also knits baby blankets, mittens and socks, and does them for adults and children. She calls her working on scarves or hats while traveling to a festival or waiting at the doctor’s office mindless knitting.

Once she finishes an item, she wears it, gives it to her daughter or sells it at festivals.

Harrower recalls the longest piece she’s knitted, which was for her daughter and started it out by spinning.

“She picked out the wool and I spun it up for her and then knitted it. It’s not an extremely difficult pattern but it has ruffles going down the front. She love’s it,” Harrower said.

She used a commercial pattern for the ruffles instead of a homemade pattern.

Getting involved with knitting simply requires two needles and a string.

“That’s all you need to get started. There are only two stitches in knitting, you cast on and then you knit or you purl. It’s all what you do with them to manipulate them,” Harrower said.

There is a significant difference between knitting and crocheting.

Fabrics used for knitting are different as well and Harrower said a person could knit with pretty much anything like paper yarn or ribbon.

“Your lace is lacier, your plain garment is less textured with knitting that you can make it smooth, whereas with crocheting it still has somewhat of a texture to it,” Harrower said.

Experts offer their advice on how to trim your…