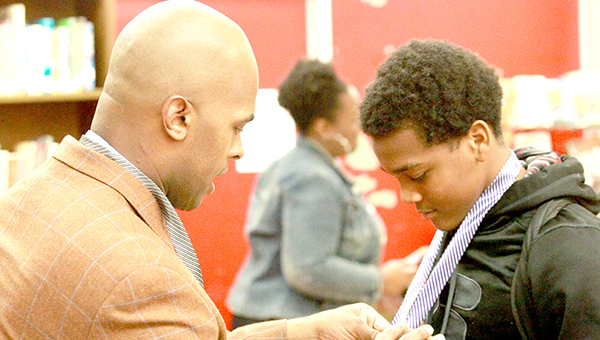 On a 7,009-mile trip through Canada and the United States, Richard Bell and the Kids First Initiative stopped in Vicksburg on Monday to spread holiday cheer to students at Warren Central Junior High School.

The Kids First Initiative is a youth support organization and while here, Bell donated around 50 holiday bags to students in the name of holiday goodwill. Each bag carried one whole frozen chicken, two cans of corn and green beans, one bag of rice, macaroni and cheese and a box of jiffy cornbread.

“A lot of people enjoy the poultry, chicken or turkey, so the chicken is easier for us to get this time of year,” Bell said. “We wanted to be a little bit healthy with the green beans and the corn.”

Neckties and scarves were also given out to the students who received a holiday bag and Bell even instructed a young male student on how to tie both garments.

Principal Cedric Magee sent letters out to all his students to make them aware of the Kids First Initiative and what it would be provide to interested students. The parents were very receptive of the ceremony and Magee was pleased with the turnout.

“I know that we were starting small and we could only do 50. The first 50 that returned their holiday letters, then those were the students of parents we called to let them know they could come to the school at 3 o’clock to pick up their bags,” Magee said.

Bell was looking for a school to bring his program to the area and heard about the junior high school from Curtis Davenport, a former substitute teacher.  Davenport recommended the school because of the leadership and professionalism of Magee. Bell immediately got in contact with Magee who coordinated the event.

Magee was excited to have his students chosen for the holiday bags and felt he needed to be directly involved in the event especially for the inaugural visit.

“I’m most appreciative that Mr. Bell chose our school and that he drove from Pontiac, Mich., to Vicksburg,” Magee said. “He’s a man of his word. Everything that he said he would do, he did it and that meant a lot. I’m looking forward to working many more years with Mr. Bell and the Kids First Initiative, if he would be a part of our school.”

Bell has made stops and donated bags in cities from Windsor, Ontario, Canada, to Louisville, Ky., Forrest City, Ark., and will be headed to Johns Island, S.C., before wrapping up in Pittsburgh, Penn.

For Bell, this event was more about empowerment for the students.

“It’s not about giving, it’s about empowerment. The young man with the necktie and even the father who came in today, they’re going to be empowered when they go home,” Bell said. “I just really want to thank Dr. Magee for having us.”