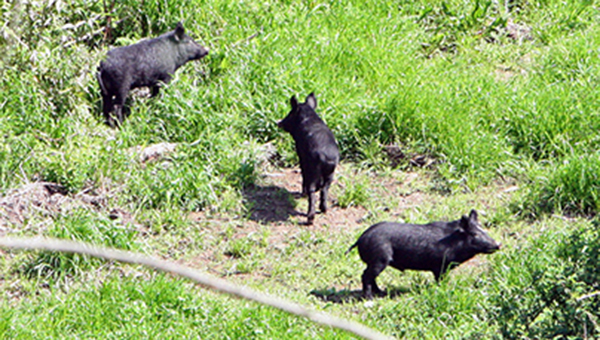 DO NOT BOTHER: Wild hogs are seen in bottom-land just off Graveyard Road in the Vicksburg National Military Park in late December 2011.

The National Weather Service has lowered the predicted crest to 50.5 feet, but flooding has already caused wild hogs, white-tailed deer and other fur-bearing animals to be misplaced from their natural habitats, which has led them to immigrate to city limits and other areas.

The Mississippi Department of Wildlife, Fisheries, and Parks issued a press release on Jan. 4 reminding residents that the mainline levee from Vicksburg to Tunica is closed as a result of the flooding. It will be patrolling the levee for public safety and to protect wildlife resources.

Wild hogs do serve as a cause for concern to weakened or damaged levees and the MDWFP has taken action to prevent further damage.

“It’s always a concern that hogs will cause damage to levees,” Chad Dacus said on behalf of the MDWFP. “The water boards are monitoring situations.”

While it is normal for hunters to shoot wild hogs on sight, it is strongly discouraged at this time. The only types of animals excluded from the closing of wildlife hunting are waterfowl such as ducks and geese.

Those who try their luck at evading the ban will face consequences.

Residents shouldn’t try to engage with these animals under any circumstances and should steer clear of areas misplaced wildlife might’ve infiltrated.

Dacus said they should not be out joyriding or sight seeing, and should worry about their personal belongings.

“They are closed for the safety and protection of them. As longs as they mind that, it shouldn’t be any issues as far as a conflict,” Dacus said. “They should leave the animals alone and not try to rescue them, push them into the water or anything like that. Don’t try to be of an assistance.”

MDWFP will not be trapping any misplaced animals.

Dacus said animals in the Mississippi Delta deal with floods on a regular basis, and when they do get misplaced, they tend to gather food and find shelter.

“The deer and other animals that are being displaced by the water, typically they’re not going to travel great distances,” Dacus said. “They’ll go find food and shelter until the water recedes and return to where they came from.”

For more information, residents can visit www.mdwfp.com or call the department at 601-432-2199 for updates on any closures of its management system and the Mississippi River.

Brian McHan likes his job as Warren Central’s starting goal keeper. Making a highlight-reel save or diving to knock away... read more