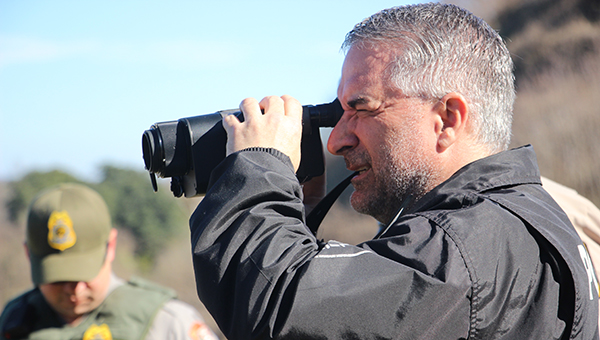 Sgt. Jeff Merritt with the Vicksburg Police Department looks through a thermographic camera while in the Vicksburg Military Park. The camera is designed to detect energy and heat by using infrared radiation.

McCloud, who is charged in the June 28 abduction and murder of 69-year-old Sharen Wilson, reportedly broke out from the jail around 5:30 a.m.

Warren County Sheriff Martin Pace said McCloud, 34, used a homemade shank, a crude knife made from a piece of metal, and attacked a jail guard.

“He forced the guard to disrobe and then put on his clothes,” Pace said. “He then held the shank against the guard (now dressed in prison scrubs) as they went downstairs and he left through a side door.”

He said McCloud took the guard’s keys and his radio as he left, but the radio and the keys were found a short distance from the jail.

McCloud is described as 5 feet, 8 inches tall and weighing 170 pounds. He was last seen wearing green pants and a black jacket.

“We found his orange jail flip-flops near the jail, so he may be barefoot,” Pace said. “We did not recover his shank, so we are considering him armed and dangerous.”

Pace said Vicksburg police are assisting in the search with patrol officers and a K-9, and Mayor George Flaggs Jr. authorized Police Chief Walter Armstrong to double patrol shifts until McCloud is caught.

“We held all our shift coming off at 7 a.m. and they are all out,” Armstrong said, and the day shift coming on duty was immediately sent on patrol. He said the department’s K-9 officer, Thor, is assisting the sheriff’s office K-9.

“We had a staff meeting, so we had extra people coming in; we have more than enough people out,” Armstrong said. “We are going to keep people on duty until this man is caught. It’s important that we catch him. He is armed and desperate and extremely dangerous.”

After learning of the escape, Pace said he notified area school officials about the emergency.

“Academy being the closest proximity, that’s where they started,” he said of the full school sweep that occurred this morning, adding additional school resource officers have been placed at each of the schools.

“We’re making sure every exterior door is locked,” St. Aloysius principal Dr. Buddy Strickland said. “Nobody is going to be allowed to go out, and we’re going to be monitoring very closely who is allowed into the building. Once we get them in class, we’re all going to be locked in.”

McCloud has prior felony convictions for auto burglary, grand larceny and armed robbery, according to court records.

McCloud was indicted in January by a Warren County grand jury on a number of charges, including capital murder with the death of Wilson, whose body was found on the property of the abandoned Kuhn Hospital.

Having an extra day only happens once every four years and one couple chose to live that extra day to... read more