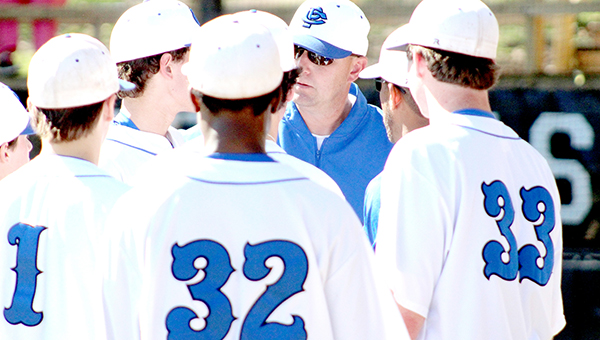 For former players, coaching is a career that allows them to shape the lives of future athletes. Others simply stumble into the position because their love for the game leads them in that direction.

Three coaches in Warren County share their unique journeys to the coaching profession and how they ended up in Vicksburg.

Swearing off of teaching and nursing as a career, Dana McGivney wound up in the former position and has grown to love what she does.

McGivney found the game of softball in her hometown of Carthage, Mississippi. As a little girl, she said softball and basketball were the only two sports for girls in Carthage. She remembers playing with neighbors and church members, and took advantage of any other opportunity she saw to swing her bat.

Softball wasn’t a sport at McGivney’s high school, however, she played at East Central Community College in her sophomore year.

While in Decatur, her matriculation at East Central was typical in terms of figuring out a post-graduate career. She didn’t know exactly how to make life work but she knew she loved sports and being around the game.

“I decided to go to school and be a teacher and hopefully work my way into being able to coach as well,” McGivney said.

And she got her break as the millennium turned.

McGivney’s first coaching job was as the seventh- and eighth-grade girls’ basketball and assistant fast-pitch softball position at Pearl Middle School in the 2000-01 school year. She was initially offered to step in for the track team but voiced her desire to coach softball.

“I said ‘Well I will, but if there’s a softball opening I’d rather do that,’” McGivney said.

Luckily, there was an opening and she put her foot through the door. Waiting on the other side was a number of trial experiences.

McGivney learned quickly the importance of treating players as individuals, each with unique personalities and different reactions to verbal discipline.

“What works for one kid may not work for another and you have to figure out what works with that particular kid,” McGivney said.

She realized if she wanted to get the best out of her players she had to figure out what motivates them. What motivated her, as an athlete wasn’t necessarily the same for another student. Through her own psychology McGivney deciphered how to get each player to do her best.

Fast forward to 2006 where McGivney noticed an online job posting for an opening at Warren Central. She interview with coach Lucy Young and the two clicked by the end of the process. She jumped at the opportunity once the job was offered.

Ten years later as she sits in her office in the girls’ field house, McGivney recalls her favorite season being the 2014-15 school year. It was a 20-win season for the Lady Vikes who made it to the second round of the MHSAA Class 6A North State playoffs.

“This year has been good as well. The kids have gotten along. We didn’t win as many games as we would’ve like but to watch the commodore and when the kids get along and they’re enjoying themselves it makes it a lot more fun to be the coach,” McGivney said.

Sports are something she loves and can’t get away from. She thoroughly enjoys coaching and as long as she can give 100 percent to what she’s doing, then she has no doubt in her mind about being in the right profession.

“If I’m not able to give 100 percent to these kids and to this program than it’s not where I need to be,” McGivney said. “I love it, I still get chills when we play. I get excited and probably get more excited than the kids some games.”

Jimmy Salmon can be accused of bleeding purple and gold for St. Aloysius, given that he’s spent the majority of his life with the Flashes.

A 1970 graduate of St. Aloysius, he’s spent a total of eight years away from the Vicksburg Catholic School.

There was the time he went away to Hinds Junior College then transferred to Southern Miss to finish his bachelor’s degree in 1974. He took another recess from the school in 1980 to work with Marathon LeTourneau – just south of Vicksburg – and returned in 1984.

When the tassels turn on May 21, it’ll signal the beginning of retirement for Salmon and his 38-year dedication to the school.

Salmon was just an ordinary football player when he played for St. Al. He lined up as a halfback on offense, and linebacker and defensive back on defense. Salmon enjoyed football the most because he was allowed to hit someone without getting in trouble.

With nary a thought given becoming a teacher while at Hinds, Salmon received a phone call from his former history teacher John Harkins asking about life after Hinds.

Salmon was majoring in history before his teacher gave him life-changing advice.

Initially, he laughed at the idea and said to his teacher “what makes you think I even would begin to think about being a teacher.”

Salmon knew he was moving back to Vicksburg after graduating from Southern Miss and reached out to his former high-school principal the Rev. Allen Camp to inquire about student teaching.

“I did my student teaching and on the day I was finishing that up he called me in my office and said ‘Jimmy the history teacher is leaving here, would you like a job?’ I didn’t have a job so I said yeah,” Salmon said.

Similarly, he began coaching by volunteering for the football team, before Joe Edwards went to bat for Salmon making him a paid assistant coach. After his stint with Marathon, Salmon served as coach for the boys basketball and girls track.

He eventually gave up basketball and track to focus on football.

Salmon’s 360-degree return to St. Aloysius has been a thorough enjoyment. He’s coached on the same field he’s played on and has seen his fair share of astonishing accomplishments set by Flashes’ athletes, most notably DeMichael’s Harris’ record-breaking performance in the MAIS Class AAA state track meet running the 200 meter dash in 20.8 seconds.

Retirement was an easy decision for Salmon as it was his own and not forced upon him. He’ll now have the time to watch his two grandchildren grow up and more time for his wife.

Watching students mature from the seventh grade through graduation is what he’ll miss the most about being a coach and educator.

Salmon loves every day he’s spent at 1900 Grove St. and

“The 38 years that I’ve been teaching, I have not once gotten up in the morning and said ‘I don’t want to go to work today.’ Not one day in 38 years. Thank God for John Harkins.”

In the time a young Wade Patrick spent playing catch with his father, he didn’t realize how special the moment meant or how his adulthood would be shaped from this bonding.

His father’s passion for baseball rubbed off on Patrick and as a result fell in love with the game. He still has pictures of him and his father throwing the ball in the yard.

“You really don’t think about it until the older you get and that’s really when it becomes more special,” Patrick said. “He’s older so we don’t get a chance to do that. That’s when you kind of look back on things and really appreciate that time that was spent together.”

A 1990 graduate of Warren Central, Patrick forewent playing collegiate baseball for smaller Division II schools. He spent 12 years as an adolescent playing the game and by that time, was burned out as a player. Patrick had dreams of playing at Louisiana State University but recognized his talents weren’t up to par for the SEC upcoming powerhouse.

Before settling in as Porters Chapel’s baseball coach and athletic director, he seven years working at the corporate level for Ergon Marine & Industrial Supply.

However, coaching was always in the back of his mind.

“I always knew I kind of wanted to do it and didn’t really know how,” Patrick said.

The opportunity for his first coaching job came at the hands of his best friend, who previously coached at the University of Louisville. Patrick’s help was enlisted to work with the now-defunct Georgia Force of the Arena Football League in Atlanta during the 2003 season.

He planted his foot in the door and 13 years later has learned to keep family and work separate, especially the lost games.

When dwelling on the losses Patrick would lie awake until 2:30 a.m. replaying the game think of what could’ve been done better, only to watch game film once he woke up at 7 a.m.

As the pain of the losses ate at his mind it turned him into a different person.

“Your answers are shorter and you’re just frustrated,” Patrick said.

While working with the Force, Patrick would lay the foundation for his second role of being an athletic director. During the offseason, he worked with the athletic department of Hinds Community College and picked up the ins and outs of the job as far as financing and scheduling.

Mainly, the responsibility of an athletic director is oversight of a school’s athletics.

The demand of being a coach and an athletic director is physically draining for Patrick, as his job is ongoing. His phone rings constantly with scheduling and game-time changes year round.

But it’s something he enjoys.

“You’re working with different people, you meet a lot of different people and you get to know some of these coach you normally wouldn’t,” Patrick said. “You spend time talking with them and once you meet them you start building relationships with these guys. Even though you’re competitors and compete against each other, as a coaching organization there’s always that coaching commodore there off the field.”

Five-years ago Patrick returned to his hometown. Now, his hand is back in the Vicksburg soil to help usher in the next generation of students and athletes.

The fun part for him is seeing people he’s built friendship with and re-establishing a connection. Sometimes he might even work with his peers’ children.

“It’s rewarding to be with kids,” Patrick said. “You have to remember that’s who we’re here for … you have to have a love for them to do it. Coaching isn’t meant for anybody.”