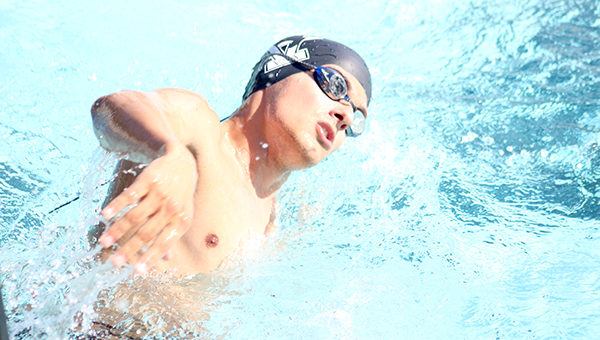 It’s always great to make a first impression, but it’s even more important to make the most of a last chance effort.

The Vicksburg Swim Association held its Last Chance Meet at the City Pool for swimmers looking to make final qualifying times for the state championship meet in Tupelo next week. Collectively the team came away with 11 first place finishes.

“Most of our kids are here to try and achieve a cut,” said VSA coach Mathew Mixon. “This is the last chance anywhere in the state to make a cut. So that’s 100 percent the goal. Then there are some kids who won’t swim again. We don’t have another meet on the schedule until September so this is their last meet of the season.”

By the fourth event of the afternoon, Mixon already had swimmers improve on their seeding times.

“We had John Daniel Busby make his qualifying time and he’s a very first timer. He’s never made a state team before and we welcome him to the state team,” Mixon said.

Juve qualified in the 400-meter freestyle with a time of 5:01.48 making this his fifth event to partake in at the state meet.

Mixon said Juve cut about 16 seconds of f his initial seed time of 5:16.42, which he hopes is a good sign of what’s to come at the state meet.

“Those are just two right off the bat that we picked up today, which is good,” Mixon said. “Right now we have 18 qualified swimmers for state and our goal is to get to 20.”

In attendance at Friday’s meet were some familiar and new faces to scramble for a final effort including, Biloxi Elite, Delta Aquatic, Sunkist Swim Team, Performance Elite Aquatics and the Mississippi Makos Swim team.

“There are a couple of different teams that don’t always come to Vicksburg just cause they needed a chance to have a last chance meet,” Mixon said. “Most of these teams are usually do attend our invitational and most athletes we know.”

Since the Stamm Family Invitational, VSA went on a training trip and traveled to Pensacola, Fla for a separate meet, where Mixon was able to evaluate his swimmers and make some adjustments.

Mixon said the team has just started resting this week and are tapering down with stretches, and fundamental and speed work.

Saturday, the City Pool will also play host to a developmental championship for 8-year-old swimmers and be more kid friendly opposed to Friday.

“It’s a developmental meet but it’s kind of like the 8-and-under state championship,” Mixon said. “It’s what it used to be called and it’s a little different because they’re racing for a title. If they win they’re event tomorrow they can consider themselves the developmental champions.”

I scream, you scream, we all scream for ice cream. Chocolate ice cream has been a food staple in my life... read more