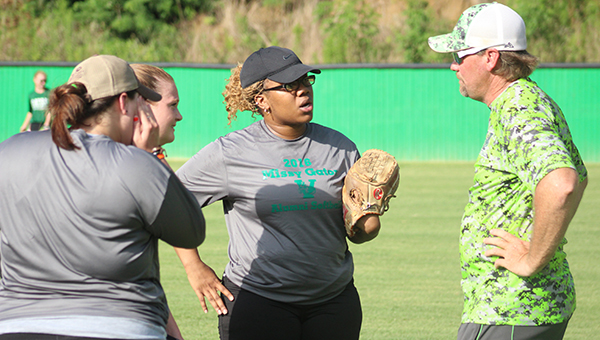 As players from Vicksburg High’s softball most recent roster to the one dating back to 1998 emerged onto the field, a sense of sisterhood blanketed the players.

While some have become mothers and others partake in their final home-game experience before venturing to college, the idea of a Missy Gators alumnae softball game was enjoyed by everyone.

It gave them a chance to reminisce on a time when the current softball field was just a vacant lot, or when injuries were sustained causing a certain basketball coach to become upset for a number of months.

“I got hurt right here on this field running to first base in a scrimmage game,” said a good-humored 2009 graduate Ebony Martin, on tearing her meniscus. “I was playing basketball too and coach (Hartzog) was mad. She fussed at me the whole day and was waiting for me at the door.”

Martin was joined with fellow classmate Samantha Frith and 2011 graduate Lea Davies who instantly fell into the same joking environment they had during their time at VHS.

“It’s nice because you don’t see them as much. You were with these girls every single day all year and it’s nice to see them again,” Davies said.

“You become a family at one point and then you go from not seeing each other and it’s nice to see them,” Frith said hoping the alumnae game continues. “I know girls that we graduated with that wanted to come but couldn’t cause some are in Texas or north Mississippi.”

Taking a step back and looking at the shared experiences among players, it made Davies, Frith and Martin proud to be a Vicksburg Gator and a part of a special family. Martin said it’s a blessing to see older classes come out and play.

Among those who graduated in the previous millennium, were class of 1998 teammates Erin Hern and Rachel Foster, who both share the game of softball with their daughters.

Hern played her games at Halls Ferry Park and admired how much coach Brian Ellis has worked to give the team something they can call their own.

Hern is moderately active inthe game by playing catch with her daughter but she said it’s good for her to see her mom in action.

“I’ve watched her play this whole season (in VGSA) and now it’s her turn to watch me because she doesn’t believe I can play,” she said.

Foster is a part of three generations tree of VHS softball.

Her daughter Kayla is replacing recent graduate Olivia Oakes as pitcher during the fast-pitch season and is also the granddaughter of coach Hugh Guest.

Being able to share the “Vicksburg High softball” experience with her daughter is a proud moment for Rachel.

With graduation about two months in the rearview for Myah Wright, this is her final home-game experience before heading off to Mississippi Delta Community College.

“It feels good,” she said. “I’m glad to be back. I haven’t been on a field since I graduated.”

Wright and other 2016 graduates easily jumped back into the swing of things to prepare for the game. She’s been hitting, catching and jogging since Tuesday to keep herself in shape.

As she talked with athletes of the past she was reminded of all the fun had on the team.

“It feels good to have them back,” Wright said. “We have the team back together again.”

At the end of his football camp, Malcolm Butler addressed the kids with a message: be successful through a sturdy... read more