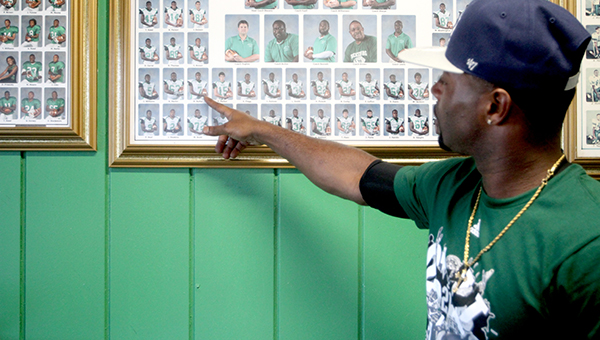 Former Vicksburg High Gator Malcolm Butler points to his individual photo in a team collage from his senior year. Butler is now a member of the New England Patriots and held his second annual football camp Saturday.

Malcolm Butler went from working at Popeyes on Pemberton Sqaure Boulevard to playing cornerback for the New England Patriots in a few short years.

Once he was picked up for a tryout with the eventual Super Bowl XLIX champions, he instantly knew he became aware of his status as a role model to kids in Vicksburg.

Butler held his second annual football camp at Vicksburg High’s Memorial Stadium Saturday for more than 200 kids. He said the camp is something he’ll continue to host until he’s unable to as a way of giving back to his community.

“A person can change another person’s life and I’m here to inspire, motivate, give knowledge and fundamentals of the game, and give back at the same time,” Butler said. “It’s all a great feeling and I love doing what I do.”

As a role model, Butler is aware of the responsibilities associated with the title. Eyes are always on him to make sure he’s doing the right thing and setting a good example.

Butler said he’s far from perfect but accepts the challenge of being a good example for kids.

“I never thought I’d be this kind of role model growing up but I’m here now and I’m doing my best to impress the kids and impress everyone,” he said.

On his way to the Patriots, life taught Butler to try and take care of himself and his family, being positive, doing the right thing and giving back to the community.

“These kids deserve something to look up to, something to be inspired by,” he said. “I’m just doing what God blessed me to do.”

Butler doesn’t just come home for his camp. He’s been spotted throughout the year to see family and surprised students at Vicksburg High during the first semester of the most recent school year.

Butler’s notoriety came in his rookie season. His game-ending interception in the 2015 Super Bowl against the Seattle Seahawks that brought the Vince Lombardi Trophy back to Foxborough, Mass will always be a great moment in NFL history.

So much so that as part of the NFL’s celebration of Super Bowl 50, Vicksburg High was awarded a golden football given to the alma mater of players who’ve had a significant impact on the game.

When Butler returned for his sophomore season, he knew he had a point to prove.

“Everything worked out all right. I think I had a decent season but there’s always room to get better. That’s my goal,” he said. “Everyone is a target in the NFL. Everyone wants to beat everyone so it’s not just me. It’s other players all across the league. It’s a competition.”

Butler was selected to the 2016 Pro Bowl but stepped away because of a knee injury.

As he heads into his third season, he’ll continue to become a student of the game.

“These last two years I’ve been playing the game and I’ve grown as a player. I’m learning the game and not just playing it. Those two right there will take it to the next level. If it’s God willing, I’m hoping to have a great season.”

Learning a different side of Vicksburg

This past week I have really begun to delve into my new beat at The Vicksburg Post. As the current... read more