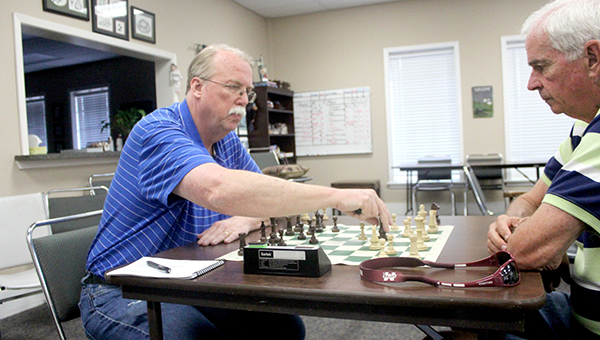 A KNIGHT IN ENEMY TERRITORY: Jeff Hensley makes a move with his knight against Douglas Dick Tuesday night at the senior center. Hensley, Dick and a host of other senior men play chess to keep their minds active.

It becomes more important to maintain a healthy lifestyle with age.

At the Vicksburg Senior Center, physical and mental exercise is abundant in standard and unconventional ways. Zumba and chair exercise are routinely found on the center’s activity schedule, and last week was the first of five spent learning a different take on yoga.

Dilbagh Singh spent his first yoga session explaining the theory of the ancient exercise. Tuesday he began demonstrating poses to the 16 students at the Warren County-Vicksburg Library.

“It was a really, really good class,” said Jennifer Harper, director of the senior center since 2001. “It was equally as informative as it was actually moving and doing and learning the positions.”

Personally, Harper believes physical health is more important to maintain than mental health as a senior. If the body isn’t working properly, she said it begins to weigh on the mental, opening the door for self-doubt and jealousy.

“A lot of people really get depressed when they can’t even go to the end of the driveway to get the mail or lean over and get the newspaper,” Harper said. “Physically if they’re not able to do what their mind or their heart is telling them what they want to do, then that starts working on the mental side. That’s just my opinion.’”

Harper said most of the activities at the center were put in place before she commanded the position, but she said she does Google new games to keep things fresh. Monday through Thursday are reserved for chair exercises. Aug 2. will complete the yoga class and Zumba will take its place twice a month.

“It’s almost electrifying because everybody is eager, excited and they’ve kind of been looking forward to it,” she said. “I don’t know what it is about the volume of music but when the music is turned up a little high and it’s happy music, every just kind of glows and they smile.”

Chair exercises are a two-part exercise for those just starting a fitness program. Harper advises her newcomers and recovering stroke patients to pace themselves.

Once someone has built enough strength to not rely on the chair for leg lifts and stretches, it then becomes a balancing tool or a place to hold their water, keys or cell phone.

“If you do it on a regular basis, you’ll do more than you did this time last week,” Harper said. “It’s a good exercise. It might be kind of cheesy for some but it’s really a challenge for those that need it.”

As much physical fun as the senior center provides, it’s also an outlet for mental exercise.

Tuesday nights from 6 to 9 p.m. are set aside for chess to keep seniors’ minds active. The game requires a lot of analysis with a constant thought process about moves and opponents.

“We know enough about mental illnesses that develop as you age: dementia and Alzheimer’s. I think we’re all aware of the theory that if you use your mind in different ways you can help combat the onset of those problems. And I think chess is one of the good ways to do that,” Jeff Hensley said, a senior who plays at the center.

“There are hundreds and hundreds of moves that you can make in any one game,” Dick said.

Chess requires a certain visual aspect and its players have to imagine what the board looks like based on x-y-z decisions made by the player and their opponent.

“To me that’s the hard part about chess, that’s the analysis part,” Hensley said. “You have to be able to understand a sequence of moves and what the position on the board is going to be like so you know whether or not you’re making the right path.”

Republicans not represented at state convention