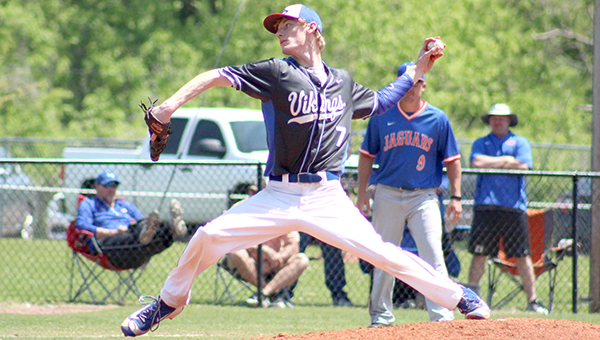 Warren Central pitcher Taft Nesmith throws in an early inning against Madison Central April 9. The NFHS has required its members to set a pitching count for high school baseball to begin during the 2017 season.

The directive set by the NFHS released on July 12 doesn’t specify a limit and is left to be decided by its individual members. Wednesday’s meeting was the first of many to hammer out the issue.

“We’re really not prepared to throw out a pitch count,” said MHSAA executive director Don Hinton. “We’re going to gather input and this is something we’ll have approved through our boards.”

The MHSAA will take into consideration pitch counts set by other states, and receive input from coaches and sports-medical professionals before setting its own count.

Current guidelines are based on an inning-pitched format where a pitcher can’t throw more than 14 innings in a week.

Hinton said the regulations would be set in October during the next executive committee meeting and will go into effect for the 2017 baseball season.

“This type of rule can be passed through our legislative body,” Hinton said, which is a 15 member committee that has the power to put the change into effect due to the quick turnaround needed before the start of the next baseball season.

Hinton said the association doesn’t like to change policies once the school year has begun, but it’s something that is needed since the requirement was issued last week. He added the MHSAA wants to get this ruling right the first time.

“We’re going to take a look at it and see what works best for kids in Mississippi,” he said.

Hinton commended the state’s coaches for being ahead of the curve and bottlenecking pitchers counts to where it hasn’t become a problem in Mississippi.

“Coaches that have been in it a long time take care of our kids and understand the importance of throwing too many pitches,” Hinton said. “That’s a big part of our priority is the health and safety of our kids.”

Wednesday’s meeting was the first effort to gather coaches’ reaction and input on the matter.

“The rest of the details are unknown such as how many pitches, how it will be monitored, how any disputes will be handled, etc,” Warren Central baseball coach Connor Douglas said.

Douglas has only allowed his pitchers to throw more than 100 times once last season while Vicksburg’s Derrick DeWald doesn’t start a pitcher more than one game a week and plans to rest his pitchers for two months in the fall.

“We don’t like to throw more than 100 pitches before district starts, and then we’ll let them go a little more after district,” DeWald said in his initial comments on the directive. “If a kid throws 30 pitches in an inning, or he’s at 80 pitches in the fourth inning, that’s a lot. You have to be aware of that as well.”

Warren County will reimburse the city for razing the Verhine building at 1015 Adams St. under an agreement between the... read more