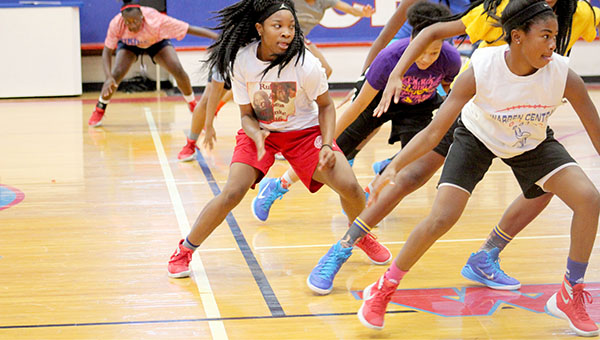 The River City Lady Thunder runs drills in Friday’s practice. The Lady Thunder, comprised of Warren Central and Tallulah, La., students will travel to Dallas Wednesay to compete in a national tournament.

About five hours west of Vicksburg on Interstate 20 lay the host city of the Cowboys, Rangers and Mavericks. It also plays host the PrimeTime Sports 2016 National Basketball Championship in which the River City Lady Thunder will compete on July 27.

Before earning a bid to Dallas, the Lady Thunder advanced to the championship game at qualifying events in Monroe, La., – shortly after the school year ended – and New Orleans. Their second place victory in both events was enough to move them on to the next round.

The Lady Thunder have faced teams that were bigger, scrappier and more physical than they were but found ways to contain their opponents and not let the score get out of hand.

“It was a team of girls that were so tall and so big, we were just looking at them like ‘We’re not going to do this,’ but we started losing by a lot and by the end of the game we lost by 10,” Kiara Lockhart said.

The tournament in New Orleans featured a player who demonstrated she was just as agile as she was physical, which threw them for a loop. But again, the Lady Thunder found a way to stand their ground and learned to not underestimate an opponent.

As constructed, the Lady Thunder is a quick team with size and strength in important areas equipped with a few spot-up shooters.

Kenzee McCoy averaged 27 points a game for the Madison Jaguars out in Louisiana and is often trusted with late-game scoring.

Fultz grabbed about seven rebounds a game adding on to her eight-point season average. Fultz is aided in the frontcourt with the height of the Williams twins.

Lockhart will give the team a quick first step in initiating fast breaks.

“Being able to work with girls that you’re not used to working with,” Fultz said, is what makes this experience special.

With a different ambience from the traditional winter season, summer has treated the players well as they’ve felt themselves become fundamentally better at the game.

“It’s good to play during the summer because you get better during the offseason,” McCoy Said.

It’s expected of the Lady Thunder to have high expectations and strive to perform well in the tournament and know it’ll require challenging work, trust from teammates and dedication for the full length of the game to be victorious. And it’s a challenge they’ve accepted as the head west.

“I think we’ll do pretty good,” Lockhart said. “I think we’ll come through, work together as a team, figure something out and come out strong.”

Summertime and sweat are pretty much synonymous here in central Mississippi, and with highs pushing 100 degrees and enough humidity... read more