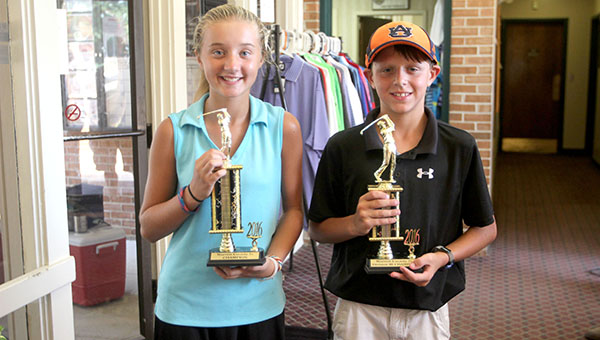 Young golfers see the bright side in final day of championship

Sportsmanship seemed to be the central theme among the younger golfers in day two of the Warren County Junior Golf Championship.

Caleb Tucker and Will Keen tied at 99 with identical scores – 49 on Thursday and 50 on Friday – to force a playoff round in the boys’ 9-11-years-old age group. The duo forced a playoff round with Tucker emerging as the victor.

However, neither player felt bad about the outcome.

“I’m feeling happy for Will because he did good too,” Tucker said. “I feel like he’s going to win next time.”

Just as much as Tucker and Keen were happy for each other, individually they felt they could’ve performed better, specifically their putts. They both look forward to coming back and competing next year.

After another 18 rounds, Gabriel Riveros won the Boys Championship shooting a 145. He and Channing Curtis tied at 74 on Thursday but the game fell in Riveros’ favor, as Curtis needed eight more strokes to take second at 153. Wilson Palmertree took third place shooting a 169.

Karley Whittington won the Girls Championship by default of being the only golfer in her age group.

The boys’ 12-13-year old age group was the most represented with five players. Hartley Sullivan knocked out four for first place shooting an 83. Joshua Larsen fell one stroke behind Sullivan for second and Trace Dailey bowed out the tournament with a third place finish at an 89.

The trio of Frances Thames – who finished first in the girls’ 11-14-year-old age group with a score of 104– Elizabeth Keen and Ellie Koestler also had high regards of each other.

Their encouragement, however, comes with its own set of self-critiques.

“I feel like I could’ve done better but it’s a lot of fun and that’s all that matters,” Thames said.

Koestler competed in her first tournament and was consistent both days shooting a 60 and 59.

Thames’ encouragement convinced Koestler to take part in the tournament. Koestler said she had fun while out with her friends.

Elizabeth Keen and Koestler both felt they played better Friday than Thursday.

Koestler attributes her turn-around performance to her putting.

“Instead of having to putt 10 times I was only able to putt two times,” she said.

Thames was fatigued after indulging in extra rounds after the initial nine for her age group on Thursday.

“I played so much yesterday. I played 30 holes after so I’m really tired,” she said.

Although she fought through fatigue on her final few holes, she remembered “life is hard but golf is harder.”

Fresh and familiar faces of Warren County took to Clear Creek in an effort to improve their golfing talents. Golfers... read more