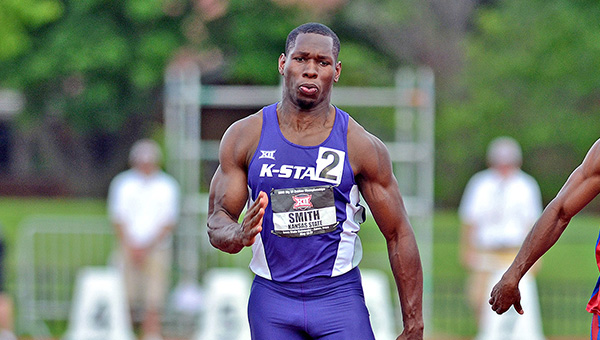 Kansas State sprinter Terrell Smith, a former Vicksburg High star, runs in a track meet in 2015. Smith has qualified for the NCAA Championships in the 200 meters each of the past two years, and has also taken on a number of community outreach projects in Kansas and Mississippi. (Kansas State Athletics)

When Terrell Smith woke up prepared to board a plane headed to the USA Track and Field Olympic Trials, he found out his 200-meter dash qualifying time of 20.44 was wind aided. His adjusted result time was 20.51, a millisecond shy of the Olympic standard of 20.50, and he was forced to stay home.

“I don’t ever want to feel that way again,” he said. “It’s time for me to step up to the plate and do what I got to do.”

The Kansas State sprinter and 2014 Vicksburg High graduate recently finished a very fruitful sophomore season. He qualified for the NCAA Outdoor Track and Field Championships for the second consecutive year in the 200 meters and has solidified himself amongst the school’s — and the nation’s — elite.

“My sophomore year was full of ups,” Smith said. “I did a lot of good things. I felt very productive overall weight training, speed work and endurance work. I dropped real good times in the middle of my season that got me high ranks in the nation. Unfortunately they were wind aided, which means I had a tail wind at my back so they didn’t count.”

Smith broke Kansas State’s outdoor 200-meter record with the aforementioned 20.51 time at the Big 12 Championship as a freshman in 2015. The feat came in a preliminary heat against Baylor’s Kevin Harris. Smith considers Harris his rival, due to their classification and skill in the 200.

Both runners came out of the final curve neck and neck before Smith took second in the heat. He wound up finishing fourth in the final.

Smith also broke Kansas State’s indoor 200-meter record during his sophomore season by running 20.93 despite stumbling in the final 50 meters.

“That was a race full of ups and downs, I’ll say that,” Smith joked.

He’s currently the fourth fastest Wildcat to run the indoor 60-meter dash, at 6.70 seconds. He also sits fourth all-time on the school’s outdoor 100-meter dash with a time of 10.33 seconds.

Smith has his sights set on breaking every Kansas State school record in his junior season, while qualifying for more prolific track events after missing this year’s Olympic trials.

After an initial rough patch early in his career at K-State, Smith gained a better understanding of the program and his coach. He said that helped him develop into a better runner and garner more faith in the program.

Smith listens to everything his coach preaches, has a locked-in focus during practice, is prompt for practice and makes sure he’s doing everything possible to improve.

“Every little piece helps. If you can improve a millisecond every other week, you never know what time you could drop,” he said. “Every inch could end up to be that mile.”

Off the track, Smith has embraced the beauty of what attending college offers. He’s a part of the university’s Student Athlete Advisory Committee, which he said is “the voice of K-State athletics,” and attends different organizations’ functions to broaden his view of people different from him.

Smith sat in on a seminar given by a model that is a transgendered woman. The experience for him was refreshing.

“She discussed how she’s a model and most people can’t tell she’s transgendered. It was an eye-opening experience to understand how women come from, how things go and how people view them,” he said.

As a proud member of Phi Beta Sigma Fraternity, Inc., his chapter ventures out into the Manhattan, Kan., community to speak with local elementary school children and assists with events such as the spelling bee and teaching kids step routines.

“I just don’t single out that I’m just an athlete but I also try to make sure I try and get the student aspect of it,” Smith said.

Smith’s community outreach is prevalent wherever he travels.

Since returning home to Vicksburg this summer, he’s been spotted helping kids at the second annual Malcolm Butler Football Camp earlier this month, working with the Vicksburg High football team and providing tips to the Mississippi Heat, his former track club team.

Smith wanted to expand his reach to other children in the community through camps, but said the majority of the camps he had in mind were closed when he arrived two weeks ago. He really wants to show children success as opposed to struggle, which is what he saw growing up in Vicksburg. If he can inspire one or two people before heading back to Kansas, he’ll feel he’s accomplished his goal.

For the former teammates he has been able to reach, he’s passed along the wisdom gained in the two years spent at Kansas State.

“Be your own self, be an individual. If you see people doing stuff that you know is not right then don’t be a part of it,” Smith said. “Try to be a part of every group, that way you can learn things from different perspectives. Try not to just stay in your comfort zone. Always expand out because that’s how you get a better understanding of the world. Just because someone doesn’t agree with you doesn’t mean you need to shun that person.”

In hindsight, Smith was always confident he’d be a Division I athlete and always wished to be in the position he currently holds, but didn’t understand how good he was. He enjoyed sports for what it was and savored the moments he had, which he feels is why he’s developed into the athlete he is now.

“I didn’t do it just because I felt like I should be doing it,” Smith said. “I did it because I liked to. It’s what I enjoy and it’s what I have a pleasure and passion for.”

High school sports are a beautiful thing to cover. Athletes in Vicksburg are — the majority of the time —... read more