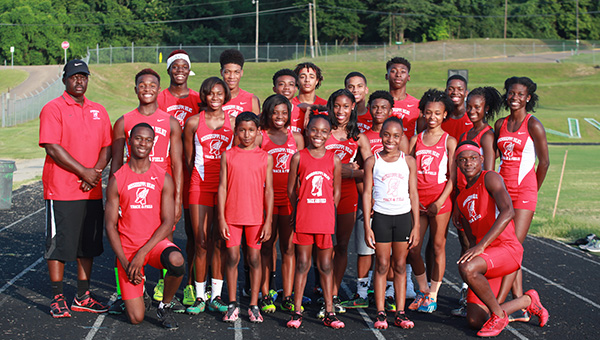 The Mississippi Heat gather for a team photo in 2015. The track club will send five of its runners to Houston for the AAU Junior Olympics in August.

When Michael Keyton started the Mississippi Heat Track Club in 2006, it was a hobby to keep up with his energetic sons Xavier and Michael Jr.

He supported the track club in Port Gibson and when his sons grew older, he used the club as a way to coach the 400- and 800-meter sprinters.

“I talked to coach (Clarence) Maxey and pretty much got him started in the program; we’re the architects behind ‘Quicksburg.’ After he got started, the club got bigger,” Keyton said.

The club has trained athletes such as Kansas State’s Terrell Smith, who holds the university’s outdoor 200-meter record; Ole Miss’ Kailo Moore who has clocked 10.3 in the 100-meter; and Texas Christian’s Jalen Miller who won the MHSAA 4A 100- and 200-meter state title with times at 10.55 and 21.31 respectively.

Smith and Moore were a part of the 4×1 relay team, which also featured B.J. Roberson and Robert Wells, that took third place at the 2009 USA Track and Field Outdoor Meet in Greensboro, N.C.

“I see people getting scholarships and going to college and people’s life getting better. Track is one of those sports that you get out what you get in. That’s what the Mississippi Heat track club does,” Keyton said.

Friday, the Heat will host a banquet honoring and appreciating athletes of past and present. The banquet will run from 7 to 10 p.m. at the Vicksburg Convention Center.

“We have a committed team that practice year around and we’re just giving back to them. We expect to induct the first hall of fame class or at least announce the names to be in the first class,” Keyton said.

Former Florida State Seminole and 1983 Gentry High School graduate in Indianola Janet Davis will serve as the guest speaker. Keyton said Davis is looking forward to speaking and having a heart-to-heart conversation with the athletes to show them what it takes to be successful.

“Just watching her be great and seeing the dedication it took to be No. 1, I’m just happy to see her come down and talk to our athletes,” Keyton said. “We’re going to try and raise the bars moving forward.”

In the spirit of moving forward, Keyton sees a team with a lot of faith in coach Maxey. He wants the club to stick around Vicksburg as it has helped change the lives of many youth in the community.

Keyton has an invested interest in keep the club alive and not just during the summer season.

“That’s the biggest thing about the heat,” he said. “We’re giving local athletes a chance to participate year around. We’re training them with talent.”

The Culkin Water District has issued a boil water notice that will impact at least 250 households. The notice is... read more