Community shows up at Bazinsky Field in support of Mudbugs 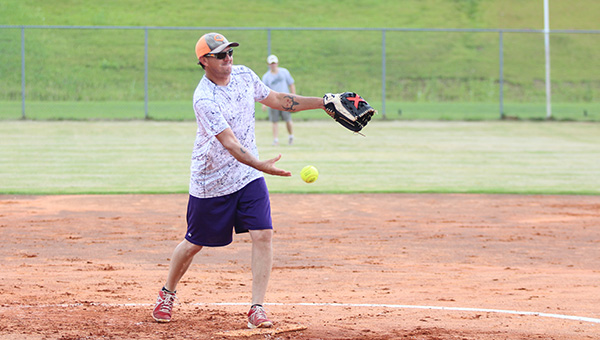 Ben Wade pitches for his team during Saturday’s charity softball game benefiting the Mississippi Mudbugs. The Mudgbugs will travel to Virginia in August to compete in the Special Olympics. (Alex Swatson/The Vicksburg Post)

Bazinsky field was home plate for Vicksburg softball past and present athletes to support a good cause.

Rick Daughtry and Mike Ferguson assembled a softball charity game to raise money for the Mississippi Mudbugs to travel to Roanoke, Va for the Special Olympics. The likes of Vicksburg’s Hugh Guest, Myah Wright and Kelcey Lockridge, as well as Warren Central graduates Alexis and Brooke Patterson.

“We’ll be here for a while,” Daughtry said of the four-team, seven innings per game tournament that began at 10 a.m. and continued as of 9 p.m.

Ferguson and Daughtry recently put on a one-pitch tournament at the City Park July 15 that lasted well into early Saturday morning. As a matter of fact, the lights shutoff at 3 a.m. but the tournament ended a minute prior.

The Mudbugs also held a car wash in June and received funding from the Moose Lodge to help cover the $8,000-plus expenses needed to get to Virginia.

Teammate Tracy Galey is excited about the trip. She traveled to the Special Olympics last year in Kansas and looks forward what Virginia has in store.

“I’m happy that we get a sport and have the money to go,” Galey said.

Mudbgs coach Sandy Hearn is happy to see the community come out in support of the team.

“It means a lot to see them here to show their support that they really do care about our special Olympic kids,” Hearn said.

In a similar event hosted last summer, the turnout resulted in three teams playing so to see the increased interest and Hearn said she projects the interest to continue in the coming years.

With three weeks left before their Aug 14 departure, the Mudbugs practice every Sunday from 4-8 p.m.

“The guys and the girls are really dedicated,” Hearn said.

Despite the excitement, there are still some challenges the Mudbugs face. Most of the expenses left are for uniforms, cleats or gloves needed for the game.

“Just to finish out our uniforms and buy the kids some cleats. They just can’t afford cleats or gloves,” Hearn said.

If you would like to donate used cleats, gloves or bats to the Mudbugs, Hearn is available at 601-415-9068. Hearn said she’ll be more than happy to pick up donations.