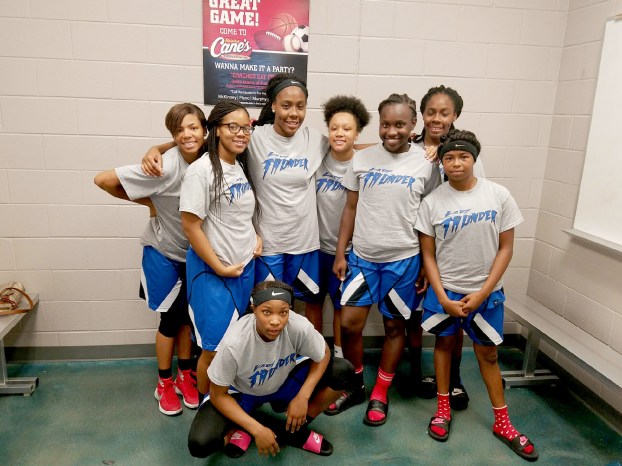 A charge called the other way or a made free throw could’ve made all the difference in the world for the River City Lady Thunder in its 48-47 loss to the DC Queens in the PrimeTime Sports 2016 National Championship Saturday.

The loss – softened by the support and comfort of parents and family members – and the tournament overall gives the girls some late-game experience they’ll be able to use at their respective schools in the fall.

“Like I told them, I blame myself for a one-point loss,” Lady Thunder coach Julius Cosby said. “I should have been better so I hold myself accountable. The kids played hard the entire time today, competed to the very end. That’s all I can ask.”

The girls have learned to play together well with new teammates and enjoyed bonding over the weekend.

A shared experience through summer practices, winning a game fresh off a five-hour road trip and then basking in the victory, as well as learning together will stick with the eight girls who participated over the weekend.

“I think this group of girls will be pretty good at both schools (Warren Central and Madison Parish in Tallulah) during their season this year. I’m proud of these girls.”

Madison Parish’s Derrica Williams helped ignite the team’s performance with 12 first-half points. Cocoa Fultz followed up with another eight and Te’Asia Sims and Kenzee McCoy each put up six.

Saturday’s matchup was like looking in the mirror. Both teams were small, liked to push the ball at a fast pace and pressed their opponent.

Cosby spent Friday night scouting the Queens and told his team before tipoff “most teams who normally press don’t like being pressed in return and were going to find out which one we are today.”

“We handled the press very well in the first half,” Cosby said of his team’s 30-point first half. “In the second half the speed it up and had us running wild.”

The Queens held the Lady Thunder to 17 points after halftime. Much like Friday’s doubleheader being split, Cosby said Saturday’s game was a tale of two halves.

“I think we played two different games in this game,” he said. “They didn’t change anything the did they just didn’t handle it the way they did in the first half.”

I’m worried about the future of our country, and it has nothing to do with the upcoming presidential election. Well,... read more