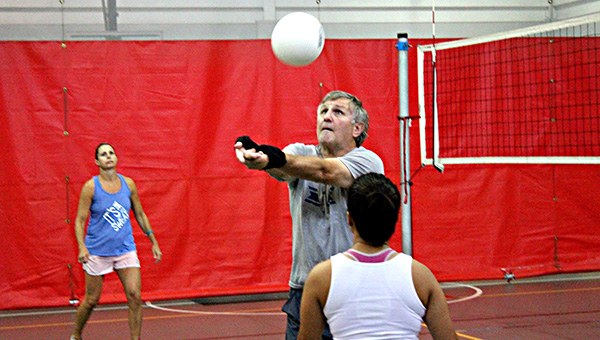 A group of friendly, yet competitive adults meet at the YMCA every Monday, Wednesday and Friday to partake in some high impact volleyball.

The 10 or so adults are an extension of an original volleyball group that played at the YMCA back in the 1970s. But due to busy schedules, the group has thinned out, sometimes playing five-on-four matches.

And still, players cover the extra ground with no problem.

“There are a lot of calls that are open to interpretation; lines are one of the biggest things,” Michael Gough said. “You get a lot of discussion of whether the ball was in or out and sometimes if the game is tight those things will get pretty heated.”

Kamace Priest said since volleyball is gaining traction at the high school level, it could jump start the cycle of adult players in the community. Not only does she play recreationally at the YMCA, but there’s also a group that meets at Glenwood Circle park at Sunday’s.

“Once we have those kids turn out of high school and start coming back into the community it might pick back up,” she said. “I think we have the lack of younger kids, so no one was exposed to volleyball.”

Gough said those that play at the YMCA came in with prior experience of the game.

“There’s a certain skill level we kind of expect,” Gough said. “What we lack is some place to learn those fundamentals.”

Gough added that they aren’t set up for novices and welcome those who have had some level of training as the game could be viewed as difficult to pick up on the fly.

Passing and serving are the most important fundamental skills needed to play the game.

For anyone thinking about getting back into the game, Priest suggests getting a ball and find a wall to practice passing.

“That’s a good place to go to get somebody to show you how to do it correctly,” he said.

Vicksburg is home to many United States military veterans, and often those veterans travel in order to interact with the... read more