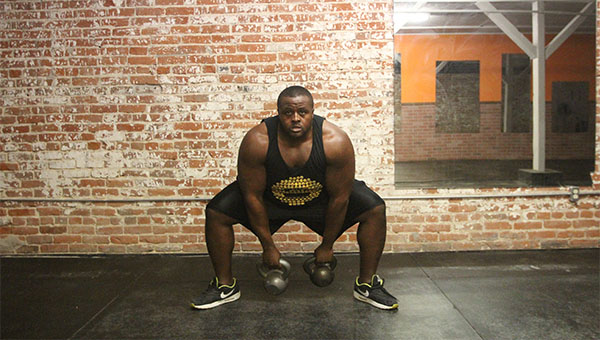 Courtney Reed, owner of Fix Fitness on Washington Street uses an array of exercise techniques and healthy living tips to aid his clients in reaching their health goals.

Downtown Vicksburg is decorated with quaint shops and restaurants, but nestled along Washington Street sits an establishment unbeknownst to much of the public.

Vicksburg firefighter and paramedic Courtney Reed – who is certified through the National Association of Sports and Science and stands at a stocky build of 5-foot-6, 295 pounds – has owned Fix Fitness at 3456 Washington St. for a year, offering aerobic, step, muscle toning and weightlifting classes in addition to an array of specialty sessions.

Fix Fitness is a double-decker gym with open floor space and mirrors lining the walls on opposite sides. Located downstairs is a basement area where his bar, free weights, dumbbells and other essential weightlifting equipment lives.

The basement space serves as a comfort zone for those who feel uneasy about working out in front of others at a traditional gym.

“Not only does the weight affect your physical health as far as high blood pressure and diabetes, but it also affects your mental health. You have a lot of people who really suffer with self-esteem issues and some people may feel they’re too big or too scrawny and don’t want to lift with bodybuilders or go to aerobics class with the size-two supermodel.”

The sessions between Reed and his clients allow for progression at their rate. Reed has a client that can only walk 40 feet before needing a break.

“Everybody’s journey is different, and you have to start somewhere,” Reed said.

Reed began his Boot Camp Aug. 1, which entails running hills,  plyometric jumps and ab workouts. He took measurements of those participating and also dabbles in food prep and nutrition to show clients that eating healthy isn’t as bad as its portrayed.

As he approaches his anniversary of being a gym owner, Reed feels good about the lives he changed.

“That’s actually one of my biggest drives,” he said. “Just growing up being extremely overweight and not muscular and being ridiculed and talked about. It’s definitely a big turnaround when you can walk around and feel confident about yourself.”

One client has been with Reed for four months and worked with him because of the one-on-one time. When he attended a wedding, he received compliments and affection from everyone there.

The client now has more energy to play with his kids, pick up the remote and notices how life is generally easier after his weight loss, Reed said.

His father personally thanked Reed for his efforts.

“I was talking to his daddy, and he was almost tearing up because this guy is extremely big and he was like ‘Thank you, this is the longest he’s ever stuck with anything.’ Those moments like that make it really worthwhile,” Reed said.

Of course being a business owner came with its initial struggles.

“Sometimes I would come up here for some classes and no one would show; sometimes two or three. But you hang in there and keep on sacrificing and continue to chase your dream,” Reed said.

The United Way of West Central Mississippi is preparing to paint the town once again during its second annual 5K... read more