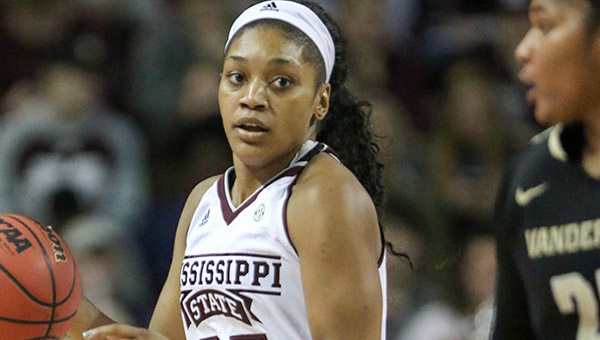 Mississippi State’s Victoria Vivians (35) won the Gillom Trophy Monday as the top women’s college basketball player in Mississippi. It’s the third year in a row that Vivians has won the award. (Walter Frazier/For The Vicksburg Post)

JACKSON (AP) — Mississippi State’s Victoria Vivians took teammate Morgan William to the upstairs portion of the Mississippi Sports Hall of Fame on Monday afternoon, where there’s a trophy case full of Vivians’ high school accomplishments that is still on display.

The Hall might need another exhibit for her college career soon.

Vivians won the Gillom Trophy for a third straight season, extending her dominance in the Magnolia State. The 6-foot-1 junior is averaging 16.4 points per game and has helped lead the Bulldogs to a 29-4 record this season, including a 13-3 mark in the Southeastern Conference.

Mississippi State reached the championship game of the SEC Tournament, but lost 59-49 to South Carolina on Sunday.

“She just gets better and better, to be honest,” Mississippi State coach Vic Schaefer said.

The Gillom Trophy is awarded to the best women’s college basketball player in Mississippi. Ole Miss forward Sebastian Saiz won the Howell Trophy, which is given to the state’s top men’s player.

Vivians is the biggest reason Mississippi State has been one of the top teams in the nation all season. The Bulldogs are currently ranked No. 7 and have been as high as No. 3.

Vivians said she “really didn’t expect to win,” because she thought the award would go to William, who was also one of the three finalists for the Gillom. The other Gillom finalist was Southern Miss guard Brittanny Dinkins.

Ole Miss will open the SEC Tournament Thursday night against either Auburn or Missouri.
Saiz — a Madrid, Spain, native who didn’t speak any English when he first came to college — has grown from a role player during his freshman season to one of the most productive forwards in the SEC.

“I’m proud of him,” Ole Miss coach Andy Kennedy said. “He deserves this.”

Ole Miss has won the last five Howell trophies. Stefan Moody won it twice, in 2014 and 2015, and before that it was Jarvis Summers and Marshall Henderson.

Before Henderson won in 2013, no Ole Miss player had won the award since it was started in 2005.
The other Howell finalists included Mississippi State guard Quinndary Weatherspoon and Delta State guard Devin Schmidt.

The awards are sponsored by C Spire Wireless.