Riverfront committee on hold — for now 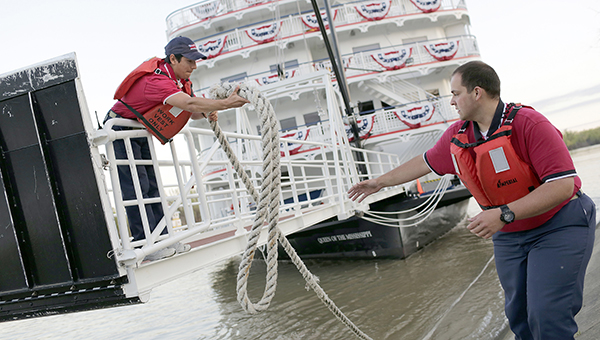 The Queen of the Mississippi deckhands Abraham Rojas, left, and Charles Fleet prepare a mooring line as the riverboat docks at City Front Tuesday.

A committee focused on the development of Vicksburg’s waterfront remains an idea, but now must wait on an election.

An ad hoc committee by the city of Vicksburg, with the mission of improving the city’s waterfront, as Mayor George Flaggs said “to improve the experience for our residents and our visitors,” is the works, but Flaggs is waiting until after June’s municipal election to put it in place.

“I didn’t want to do it now and appear to be political,” Flaggs said. “It’s an important project and we need to do it right.”

The yet to be named committee could harken back to a former standing committee, the Riverfront Development Committee, that was dissolved when Vicksburg annexed the Port of Vicksburg.

When active, the Riverfront Development Committee was “responsible for promoting activities along the riverfront ajoining the Yazoo River in Downtown Vicksburg, ideas for responsible use of city properties and/or city development at the riverfront is encouraged.”

Today, those responsibilities appear to have been dispersed between Vicksburg Main Street, the Vicksburg-Warren Chamber of Commerce and the Vicksburg Convention and Visitors Bureau.

But Flaggs said there is a need for a new committee to be formed “in response to complaints about the lack of development along the waterfront and the need for improvements.”

The current state of the city’s waterfront has been the topic of a number of complaints raised by residents, visitors and downtown business owners.

“I feel like we are missing out on a lot from the river,” former Vicksburg Mayor Joe Loviza, who as mayor made appointments to the then Harbor Commission and Riverfront Development Committee. “There is a lot that could be done and a lot that is needed.”

Loviza talked about the work during his administration to improving docking capabilities for riverboats, such as the American Queen, and a small dock for fishing boats and boats offering tours up and down river.

“I grew up on the river and know how much it means and could mean to this community,” Loviza said. “In no way am I criticizing the current administration, but I feel it is important we invest in our waterfront.”

Flaggs said that investment is on the way as part of the city’s $9.2 million bond project.

Included in ideas for the waterfront are placing murals on the backside of the flood wall, completing a sitting area behind the Old Depot Museum, the possibility of a floating dock for small boats and development of a farmers market.

Flaggs also said private investments, such as by those who own property and businesses along the waterfront is also crucial. He mentioned the planned improvements at the Portifino Hotel, which has yet to be formally announced or permitted.

“I really believe we can improve our waterfront and compete with others along the river, such as Natchez,” Flaggs said. “The committee will be important to that process and I look forward to them getting started.”

“I could see this getting the committee formed and plans being developed as early as July,” Flaggs said.