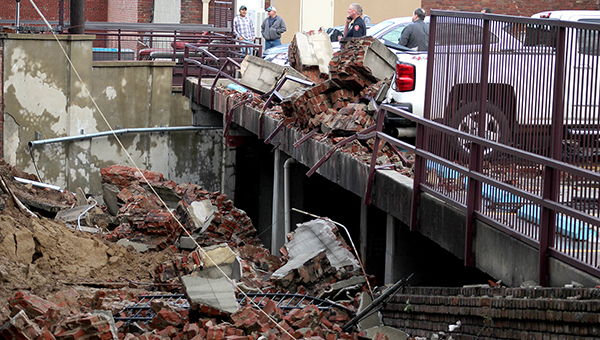 Emergency and construction crews survey the damage from a retaining wall collapse Monday behind St. Paul Catholic Church. The collapse threw debris into the nearby Trustmark Bank ATM lane and damaged vehicles parked in a nearby parking deck used by residents of The Lofts. No one was injured in the event, which occurred after midnight Monday. (Tim Reeves | The Vicksburg Post)

A line of strong thunderstorms packing heavy rains, lightning and the potential for tornadoes knocked down trees, caused scattered flooding across Vicksburg and Warren County and was responsible for putting almost 5,000 area residents in the dark.

McKinnis said 4,021 Entergy customers remained without power  Monday afternoon, victims of the combination of downed trees, broken poles and the flooded substation.  McKinnis said Entergy officials have called in extra crews and were in the process of assessing the damage. She said power was expected to be restored to most of the affected areas Tuesday, with some areas possibly not getting power back until Wednesday.

According to the rain gauge at Vicksburg’s water treatment plant on Haining Road, the storm dumped 10 inches of rain from the time the storm began early Sunday evening until the deluge stopped sometime early Monday morning.

The excessive amount of rain over a short period of time overwhelmed storm drain systems, causing water to backup and and cover city streets and some county roads with water, in some cases making them impassable. High water on Veto Street flooded the Vicksburg Police Department lobby and several other areas of the building.

“There was about 2 inches of water in the lobby and computer room and the captains’ office,” said Sammie Rainey, city building maintenance supervisor. “My people were in there Sunday and they were able to get the water out. Everything there is fine.”

The police department wasn’t the only city department to be flooded. The city’s wastewater treatment plant on Rifle Range Road was flooded as nearby Hatcher Bayou and Durden Creek overflowed their banks, putting water into the plant.

The heavy rains also caused the collapse of a retaining wall between St. Paul Catholic Church and the Trustmark Bank building, which contains the Lofts Apartments.

Falling debris filled the lane that leads to the bank’s ATM machines and damaged cars on a nearby parking deck used by residnets of The Lofts.

Bank officials said the damage would not impact other, normal banking operations.

The flooding also forced some city and county residents to leave their homes, some by boat.

Despite the power outage, Dana Road Elementary, which was without power Monday, was open, as were all schools in the Vicksburg Warren School District, school officials said.

Besides downed trees and flooded streets, city and county officials also reported mudslides in several areas. Slides were reported in the Redwood Road and Dana Road areas, and on North Washington Street.

North Ward Alderman Michael Mayfield said slides covered North Washington from the Klondyke to the U.S. 61 North Bypass, and crews were working to clear the street for traffic. He also said several driveways in the Kings community were washed out by rushing water.

“I’m hoping this stuff will quit, because we can’t take too much more of this,” he said.

New ERDC director: This is my ‘dream job’: