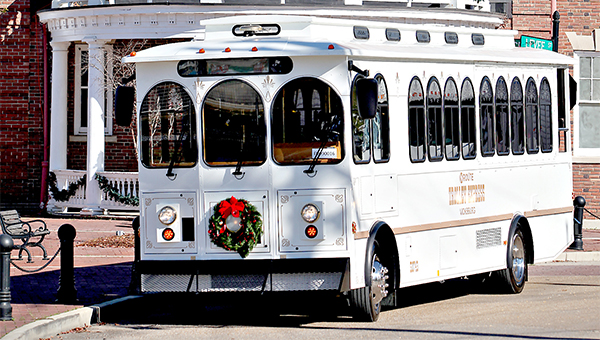 The NRoute Vicksburg Trolley appears ready before its ribbon cutting ceremony in December 2015 in this file photo. Today, after operational losses, the trolley remains parked in one of the city’s parking garages.

In December 2015, NRoute’s Vicksburg Trolley was unveiled with plenty of fanfare.

During a cool morning, decked even in a Christmas wreath, the trolley, which rolled up to a special ribbon cutting, welcomed by business and city leaders. It was purchased in December 2014 by NRoute using federal and city funds, with 80 percent of its $192,979 cost paid by a federal transportation grant and the city paying the 20 percent match totaling $38,595.

Today, the trolley sits away from much of the public’s view inside one of the city’s parking garages. Both literally and figuratively, it is parked.

Before the trolley’s first route through Vicksburg, NRoute officials laid out how the trolley would be used.

“This new trolley will cater more to tourists and showcase the city. This new trolley could bring return visitors and encourage people to choose to reside in Vicksburg,” NRoute executive director Evelyn Bumpers said at the time.

The plan for the trolley was for it to make daily trips through areas catering to tourists.

The route initially called for stops at the Old Depot Museum on Catfish Row, Cedar Grove Mansion in the Garden District, the corner of Crawford and Washington Streets in the Downtown Shopping District, The Old Court House Museum, Duff Green Mansion in Old Town Vicksburg, the Southern Cultural Heritage Center and the Outlets at Vicksburg.

Now, it sits in the parking garage.

In a response to an open records request from The Vicksburg Post, NRoute showed the trolley proved to be far more costly — and far less profitable — then expected.

Calls and messages left for Bumpers by The Post were not returned.

In that same information, NRoute did note “efforts are being made to restructure the route. Once that is done, it will be announced to the public and put back into service.”

To date, no announcement has been made and no plan made public.

Monday, Vicksburg Mayor George Flaggs Jr. said the city has offered to help subsidize the trolley to get it back running. That money would be in addition to  the annual $200,000 supplement NRoute receives from the city and the $30,100 it gets annually from Warren County.

“We have told them to let us know what the operational costs of it are and what it might take to get it up and running — if not all the time, but for events,” Flaggs said. “It is our hope just to see it put to good use and eventually being used in a way that works for everyone.”

Flaggs said while the offer to help has been made, the city is waiting for information from NRoute to see if and what the city could do.

NRoute was formed as a city department in 2006, three years after the city instituted tougher regulations on taxi cabs, forcing two Vicksburg cab services to shut down.

The buses began rolling in June 2006, and NRoute became an independent operation in October 2007, run by a five-member board.

Besides the city and county supplements, the transit system is funded by federal transportation grant funds administered through the Mississippi Department of Transportation, which makes up the bulk of the system’s revenue, and fares from riders.