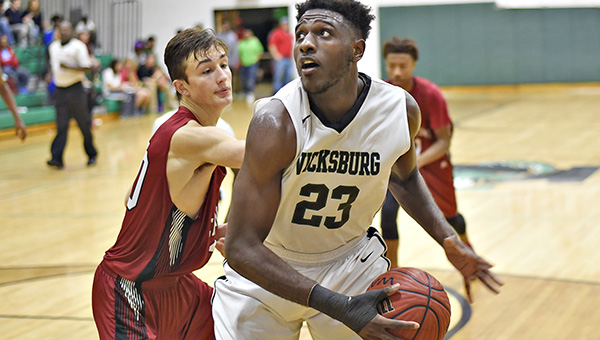 Kirk Parker had one last piece of business to take care of before putting a bow on an excellent high school basketball career, and he checked off the box Wednesday.

Parker had previously signed his national letter of intent. The signing ceremony was a formality, but it still instilled him with a sense of pride and accomplishment.

“It was very big,” he said. “It wasn’t just about me. It was about my family, my mom, God, and everybody in my life that has supported me.”

Parker was a four-year starter for the Gators. The 6-foot-5 forward averaged 11.1 points, 8.6 rebounds and 1.6 blocks per game for his high school career, but truly fulfilled his potential as a senior in the 2016-17 season.

Parker averaged a double-double with 13.6 points and 10.5 rebounds per game this season and had a total of 15 double-doubles. He was named the Vicksburg Post’s boys basketball Player of the Year.

His success garnered a number of offers from Mississippi’s junior colleges and some four-year schools, but he said he chose Pearl River because of the fit and the opportunity it provided to showcase and improve his skills.

“Of my D-I offers, I felt like I didn’t have the best offers I could get. So I took the Juco offer,” Parker said. “I just felt like I was at home at Pearl River. I was comfortable there. I felt like it was a good fit for me. I think it’s a great opportunity. It’s going to get me some exposure to D-I schools.”

Parker will have to wait at least one season before he can move on to a four-year school, and he won’t pass the time idly. He has a solid post game, but is a bit undersized for a college power forward. To compensate, his mission this summer is to develop a reliable jumper that will allow him to play inside or outside.

Parker said he also plans to work on his ballhandling skills to help him play either power or small forward at the next level.

“I have a great IQ. But I have to get my hands on opponents better. I have to work on my dribble and my shot,” Parker said. “I have to prove to people that I’m not just an inside guy. I can play an all-around game.”

Parker added that, most of all, he’s just looking forward to the next challenge.

“I’m just ready to explore life in college and see how the game works, and make myself better and show I still can be a great player at the next level,” Parker said.

For himself and others, Rogers needed to leave