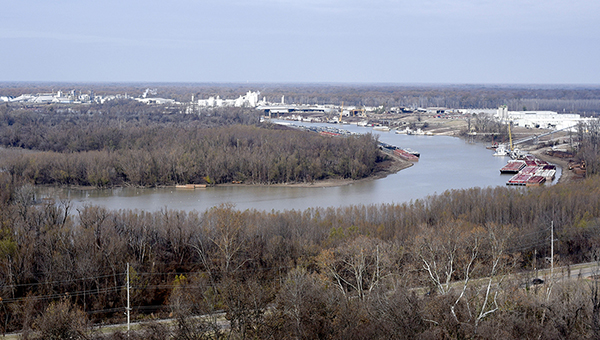 Through the first quarter of 2017, the Port of Vicksburg has brought in more than 47,000 tons of products. That is more than a 22 percent increase over the same period in 2016.

Tucked away in a corner of the Yazoo Diversion Canal, most would not realize just how busy the Port of Vicksburg is.

But, looking at the figures shared during Monday’s Port Commission meeting, there is no denying the port is very busy, and business is picking up.

During his portion of the meeting, WATCO’s Chris Maxwell said incoming shipments at the terminal have picked up and the first quarter of 2017 was significantly better than the same time last year.

From January to February, the inbound tonnage at the port tallied 47,530.28 tons, compared to 36,924.93 last January through February. That marks a 22.32 percent increase in business.

“The steel market is picking back up, which has really been a driving force for us.”

In March, the terminal received 18,856.42 tons, which was slightly down than last March, but combined with the increased tonnage from January and February, added up to a much improved first quarter.

And, that trend of year-over-year improvement should continue, as WATCO will soon be going up against months from 2016 that were really tough.

From June through October, the terminal averaged just shy of 2,300 tons.

“We should have been really busy during that time, but the commodities market went through the tank,” he said. “Oil prices dropped, which killed the steel market, hurt agriculture market. It killed the value of everything. And our business suffered for it.”

But, it was the fourth quarter where Maxwell said they the trend head back in the right direction.

“We were coming back November and getting back to where we needed to be,” he said, adding the uncertainty also played a role in sluggish months leading up to November. “Say what you want, but it kind of fell with the election. Regardless of who you pull for, the economy stops. People just don’t know which way to bet. The economy is going to go on pause until the election.

“Whatever the result, whoever wins, then you know how to adjust moving forward.”

In November, the terminal received 14,230 tons and in December saw an additional $16,726 tons received.

Last year, more than 30,000 visitors made their way to Vicksburg by way of a variety of riverboats. They stepped... read more