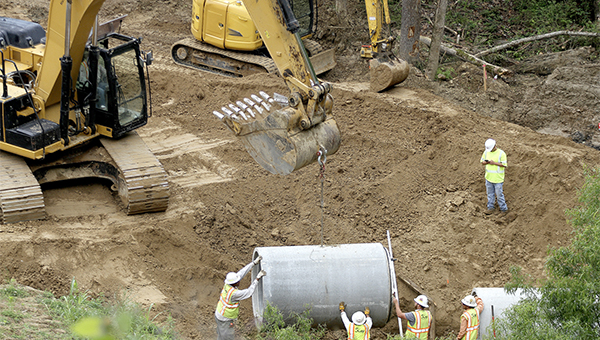 Construction crews work to repair drainage problems near South Frontage Road Tuesday. The repairs were needed after an embankment failed, plugging the drainage pipe. Portions of South Frontage Road will be closed beginning Thursday, as crews continue with these repairs and rebuilding the failed embankment. The closure is expected to last through the end of June. (Courtland Wells/Vicksburg Post)

In a brief release Tuesday, the city of Vicksburg announced the impending closure of a part of South Frontage Road due to what is called an “embankment failure.”

Beginning Thursday, South Frontage between Porters Chapel Road and Highland Drive will be closed as crews work to repair the slope of south side of the road that failed and went from being a slope to a near vertical face, officials with the Mississippi Department of Transportation said.

The repairs and closure are expected to last through June 30.

Mississippi Department of Transportation engineer Durwood Graham said there is an immediate need to repair this slope, and a drainage issue, before any more damage is caused.

“We are working on it right now,” Graham said. “The back slope has failed and created a vertical face to the edge of the pavement.”

And, it is not just the slope that must be fixed.

“When the slope failed, it plugged a drainage pipe, which has caused negative drainage,” he said. “We first need to create positive drainage through a 54-inch pipe, and then recreate the slope.”

Water lines in the slope were ripped away in the slope’s failure, but a gas line in that area was not damaged and crews are working around it. Graham also said engineers are not sure what might have caused the failure in the first place.

Graham said the estimated cost for the repairs and rebuilding of the slope is around $700,000.

Tucked away in a corner of the Yazoo Diversion Canal, most would not realize just how busy the Port of... read more