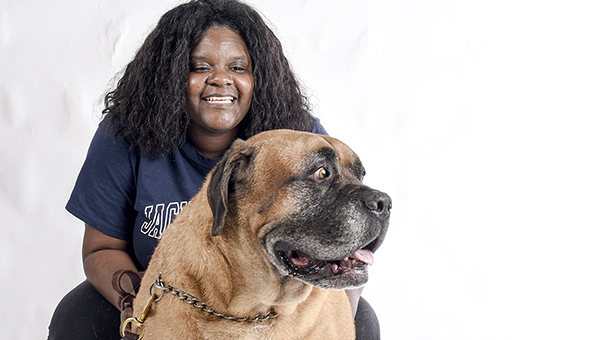 It is official. King Robbie Shakespeare has been crowned.

Thanks to the support of voters through three competitive rounds of The Vicksburg Post’s annual Pet Idol contest, King Robbie Shakespeare proved victorious.

Robbie, as he is called, is a 154-pound, loveable bullmastiff, that his owner Brittany Gibson said is a normal guy.

“He’s laid back, motivated by food and likes to sleep,” Gibson said. “But, he is really loveable.”

Robbie beat out 28 other participants in the annual competition that goes to support The Post’s Newspapers In Education program. The proceeds generated will provide newspapers to classrooms in Warren County beginning next school year.

“As the rounds went along, the more excited my friends and family got,” Gibson said. “People just kept coming up to me and said ‘I saw Robbie in the paper’ and I would tell them ‘that’s great, now go vote.”

Ironically, in that first round, Robbie beat out his sister, Queen Xena of Night, who failed to make the second round.

In the second round, Boo received the most votes to move on to the final round, while Robbie had the second most votes.

He was just saving the best for last.

In the final round, which pitted Robbie against Boo and Goldie, Robbie received 1,546 votes. Boo received 1,180 votes, while Goldie came in third with 674 votes.

For winning, King Robbie Shakespeare receives a gift basket with toys and plenty of treats.