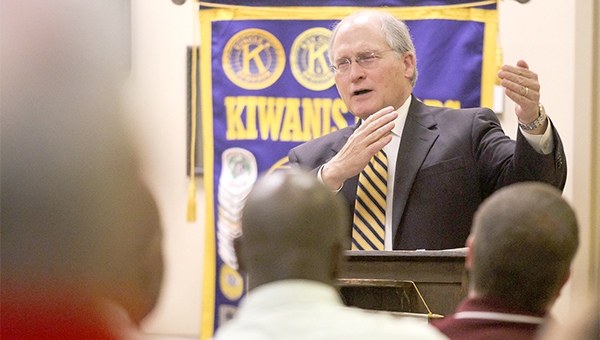 Tuesday was a special day at the weekly gathering of the Vicksburg Kiwanis Club.

Waller, who has served on the Supreme Court since 1996, and Chief Justice since 2009, shared stories about his family including the tale of his great-great grandfather who served as a Baptist missionary in Mexico in the 1800s.

“He lost his wife and three of his children while he was there,” Waller said. “After his wife died, the Foreign Mission Board sent him on what was referred to as an evangelism tour. Back then, transportation would have been a mule for him and a mule for his things. He recorded that in the Sierra Madre Mountains, the trails were turning into narrow ledges around the mountain. You couldn’t see what was on the other side. The people there told him pull his pistol out and fire twice before he starts. If you don’t hear return fire that’s the best you can do”

His message to the gathered clergy when they face challenges of “biblical proportion” that they don’t have answers to was to “do what A.C. Watkins did. Sometimes you’ve got to fire two shots and go.”

Event organizer Martin Chaney said that the club host clergy appreciation day as their way of giving back to local ministers and thanking them for their service. The luncheon has been held annually since 2008. The ministers were treated to a meal and given a gift of appreciation from the club.

“It is a wonderful community event in appreciation for what we do, and the different things that a pastor needs on any given day.” Tom Lalor, the pastor at St. Paul Catholic Church, said. “To receive the affirmation for what you do is wonderful.”

The annual luncheon also served as an opportunity for local minsters to meet and network with each other.

“To meet other ministers is very important, especially for someone like me who spent most of his time in Natchez or Jackson,” Lalor said. “I am getting to meet a lot more ministers.”

Willie Nettle the pastor at the Bypass Church of Christ added, “It is important to know what other churches are doing and meet the other ministers to create some fellowship with them.”