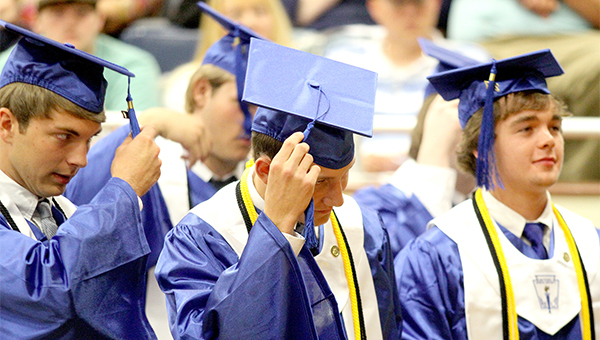 PCA bids farewell to class of 2017

Porter’s Chapel Academy’s Class of 2017 may have been small in number, but they graduated Thursday leaving behind a strong academic record and having made a difference in their community.

The Class of 2017’s 11 graduates combined to receive $389,734 in academic scholarships to continue their education and completed 731.5 hours of community service during their four years of high school.

“Congratulations to the 2017 graduates,” Principal Pam Wilbanks said in her closing remarks. “We are very proud of your accomplishments.”

Michael Busby, who graduated from PCA in 2007, served as guest speaker during the graduation ceremony. He played baseball at Hinds Community College and the University of Alabama-Birmingham before completing a Doctorate of Physical Therapy. He currently serves as the clinic director at Elite Performance and Rehab in Vicksburg.

Busby talked to the graduates about his three keys to have success — set goals, persevere and keep God first.

“I encourage you all to continue to live and dream and move forward,” Rogers said. “After all, we are the next generation to change the world.”

PCA’s valedictorian was Cody Bryant. He graduated with a 4.0 GPA and cumulative average of 97.5. He plans to attend Mississippi State and major in civil engineering.

“We finally made it. We faced many trials and tribulations, but we finally made it,” Bryant said. “In our 18 years on this earth, we witnessed four different presidents, the worst act of terrorism in history, the war on terror, the worst storm in American history, the rise of smart phones and social media, the largest stock market crash since the great depression, a graduation without bathrooms and countless other changes. But, we made it.”