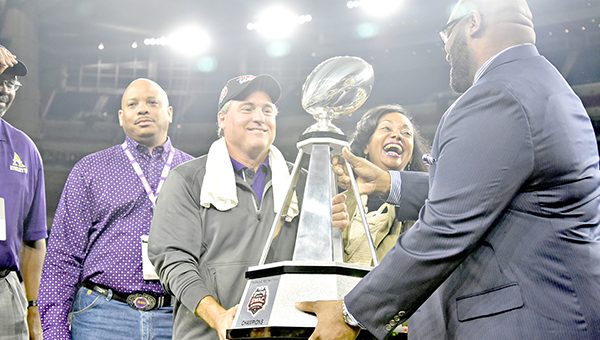 Former Alcorn State coach Jay Hopson accepts the trophy after leading the Braves to victory in the 2015 SWAC football championship game. The SWAC announced Tuesday that it will discontinue the conference title game after the 2017 season. (File/The Vicksburg Post)

BIRMINGHAM, Ala. (AP) — The Southwestern Athletic Conference has decided to end its annual football championship game following the 2017 season.

The SWAC championship game has been played since 1999. The conference said it will work with SWAC members to develop a tiebreaker procedure and deal with schedule changes that might arise from the new format.

Beginning in 2018, the SWAC championship will go to the team with the best regular-season conference record.

Jackson State athletic director Wheeler Brown told MSnewsnow.com that eliminating the championship game was a “financial decision” for the league.

“I don’t know exactly what the rent is for the stadium, but you can imagine it’s an astronomical amount,” Brown said. “When you look at the numbers and compare the ticket sales, obviously they weren’t evening out, if nothing else. It was a matter of making a financial decision.”