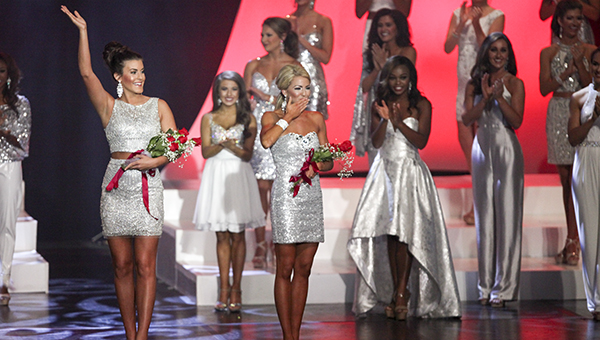 For the second night in a row, three contestants were named as preliminary winners during the annual Miss Mississippi Pageant.

Buys, who is a second year Miss Mississippi veteran, danced en pointe to “Viva” by Bond.

“Viva means life, and I feel that this song just embodies everything I stand for. My platform is Water For Life, I love life, I embrace every moment, and this is just literally an opportunity for me to express my love for life, and I get to do it through my love and passion of dance, ” Buys said.

“Being a double preliminary winner is definitely a confidence booster, she said, and it is a great way to feel like my hard work has paid off.”

Bryant is also a second year Miss Mississippi Veteran and for the competition she performed her rendition of “Nostradamus” on the piano.

“I chose this song because it is so much fun and upbeat, and I really wanted to get the crowd involved,” Bryant said.

Because she had competed last year, Bryant said this year her nerves were calmer.

“I was determined this year that I was going to come out here, and I was just going to leave it on the stage and get the audience involved.”

Both Buys and Bryant were each recipients of a$500 scholarship.

As a newcomer to the Miss Mississippi Pageant, Wortsmith said she was excited to be named Thursday night’s swimsuit preliminary winner.

“This is completely surreal. I am so excited,” she said.

To prepare for the swimsuit phase of the competition, Wortsmith said she ate a healthy diet and exercised.

“I took classes at Orange Theory Fitness. The classes were group workout classes that actually monitor your heart on a screen,” she said, “so you can compete against other class members. For someone that is motivated in a competitive environment this was great for me.”

Wortsmith, who was the recipient of a $400 scholarship, added that maintaining a healthy lifestyle is important, whether you are in a pageant or not.

The final preliminary competition will be held at 8 p.m. tonight at the Vicksburg Convention Center.

A composite score from the three preliminary competitions in talent, swimwear, evening wear, on-stage questions and off stage interviews will determine who will be in the top 10, which will be announced at the beginning of the final competition Saturday night, and the 2017 Miss Mississippi will be crowned.

All tickets are sold out to the pageant, but Saturday night’s final competition and crowing will be televised on WLBT, and it will be live streamed on the Miss Mississippi website.

The Vicksburg Post will also be posting photos from the pageant on each of its social media outlets.

Innovation at the heart of annual Camp Invention