Florida and LSU to meet in College World Series final 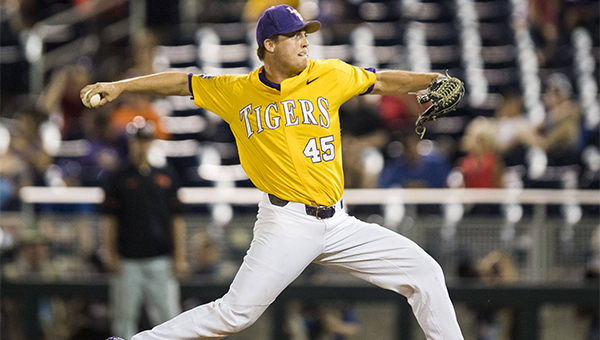 OMAHA, Neb. (AP) — The matchup for the College World Series finals certainly bolsters the case for those who say the best baseball in the land is played in the Southeastern Conference.

To get to the best-of-three finals starting Monday night, LSU (52-18) beat an Oregon State team, which had the highest winning percentage of any program in four decades, twice in two days.

Florida (50-19) became the fourth team in CWS history to shut out an opponent twice with a pair of 3-0 wins over TCU wrapped around a 9-2 loss to the Horned Frogs.

So here they are, the teams that shared the SEC regular-season championship playing for the national title in Omaha.

“I think this is how it had to be,” LSU shortstop Kramer Robertson said Sunday. “If you want to be the best, you’ve got to beat the best. I think both teams are happy with who is in the finals.”

With eight players taken in the first 10 rounds of last year’s Major League Baseball draft, the 2016 Gators were the season-long favorites to break through with a championship. They went 0-2 in Omaha.

This year’s team lacks depth and dynamic offense, but has been able to count on dominant pitching and defense. The Gators have played 25 one-run games and won 18 of them.

“I had a feeling early on if we stayed healthy that we had the ingredients to be successful out here,” Gators coach Kevin O’Sullivan said.

“I thought our starting pitching was going to be as good as anybody’s in the country. We needed to figure out our bullpen, and Michael Byrne has turned out to be outstanding at the end.”

LSU leads the all-time series with Florida 61-47-1, but the Gators won two of three in Gainesville on March 24-26 in the teams’ only meetings this season.

“If the truth be told, I was rooting for Kevin and the Gators last night,” said Tigers coach Paul Mainieri, sitting next to O’Sullivan at the news conference.

“I just think it’s an awesome thing that these two SEC schools get to play for a national championship. Probably the only person that’s happier than you and I, Kevin, is Greg Sankey, the commissioner of the SEC. He’s anxious to get up here and get behind home plate so as not to show any favoritism.”

This will be the third all-SEC final. South Carolina beat Florida in 2011 and LSU won over Alabama in 1997. The Tigers are going for their seventh national championship, and first since 2009, while Florida is in the finals for the third time and looking for its first title.

CWS teams have taken advantage of winds blowing out to hit 22 home runs through 14 games, the most since the event moved to TD Ameritrade Park in 2011. Typically, the prevailing south wind this time of year makes it difficult to get the ball out of the park, but winds from the north and west the past week have made the home run a factor.

“You can’t pitch scared,” Singer said. “Yes, the ball is leaving the yard, but that’s part of baseball. Just try to keep it low.”