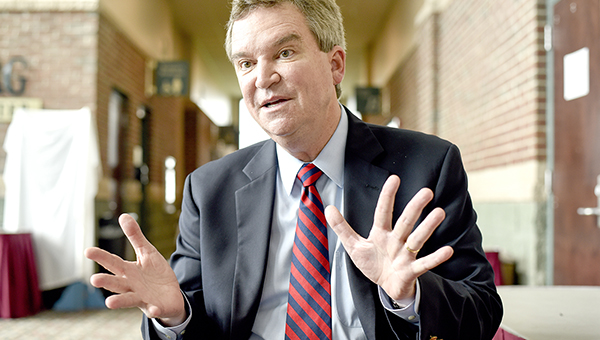 “It means a lot to me to be here in Vicksburg for this big anniversary,” Haskell said.

In an interview prior to the presentation, Haskell, who is an Amory native and former executive vice president and worldwide head of the venerable William Morris Agency, said he remembered being in Vicksburg and attending the Miss Mississippi Pageant when his wife, the former Mary Donnelly, was crowned Miss Mississippi.

“Mary was crowned Miss Mississippi when we were dating at Ole Miss, so I remember all of us being here 40 years ago to support her,” he said.

Hakskell first became involved in the pageant world, he said, when he volunteered to sing in the chorus when the Miss Mississippi Pageant still had a live orchestra.

“I loved every bit about what the Miss Mississippi Pageant represented,” Haskell said, which eventually led him to becoming the local director of the Miss University Pageant.

It was during his tenure as the director of the Miss University Pageant that Donnelly was crowned the winner, and then went on to win the state title.

It was after a long and storied career in Los Angeles with the William Morris Agency, Haskell said, that he was asked to take on the leadership role of the Miss America Pageant.

“I said I would do it one year and now that one year has become 12,” he said.

Under Haskell’s leadership, the Miss America Organization has been rebranded in an effort to gain the position the organization holds, which includes being the number one provider of scholarships for women in the world.

“We give almost $6 million away at the local, state and national level. This is something unprecedented and something I am proud of,” Haskell said, adding he is proud his home state is one of the best programs in the system.

Camel presentation a part of the Siege of Vicksburg’s…