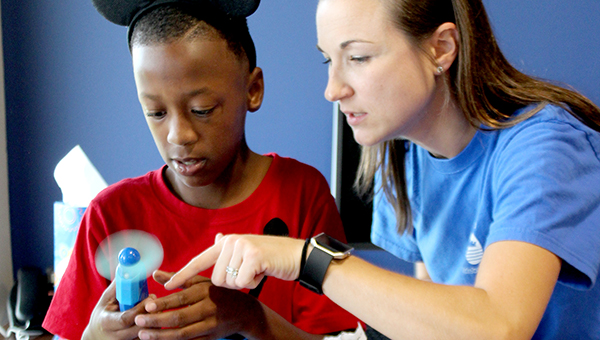 Junior Auxiliary of Vicksburg member Melissa Smithheart goes through a bag of gifts and treats with Trevonta Robinson Friday at Golding Barge. Robinson, and his family, are heading to Disney World Tuesday as part of a wish granted by Make-A-Wish. (Tim Reeves | The Vicksburg Post)

Trevonta Robinson does not have a plan yet for what ride he wants to ride first or what sight he wants to see first. All he knows is he wants to check each of them off as he goes next week.

Thanks to Make-A-Wish, and the Junior Auxiliary of Vicksburg, Robinson’s wish of riding the rides, and seeing the sights at Disney World will all come true starting Tuesday.

“I am just excited. Excited about seeing it all,” Robinson, 11, who is entering the sixth grade at Warrenton Elementary, said.

Robinson and his family were treated to a festive sendoff Friday organized by the Junior Auxiliary and hosted by the staff of Golding Barge. The party included Disney-themed treats and a photo booth, along with gifts and accessories needed for the trip to Disney.

“For these kids the wish, as they are going through their treatments, is really something they can look forward to, keep focused on,” Make-A-Wish senior director of development Rod Henderson said. “You can see the excitement level for him is really at its height right now.”

The Junior Auxiliary of Vicksburg is a partner of Make-A-Wish, and members have served as volunteers to assist families in preparing for their wish and their trips.

“It has been fun helping them with this special trip,” JA member Melissa Smithheart, who has served as coordinator of this trip, said. “Trevonta said his favorite Disney character is Pluto so I really hope he gets a chance to see him.”

Robinson has battled heart disease since birth, which has prevented him from participating in sports and forced him to battle a number of health issues related to the disease.

But, that hasn’t stopped him from gearing up for the upcoming weeklong trip.

“It was the best day of his life,” Robinson’s mother, Neisha Segrest said of the day he learned his wish had been granted. “He can’t stop talking about the trip.”