City plans celebration to send its Miss Mississippi off in style 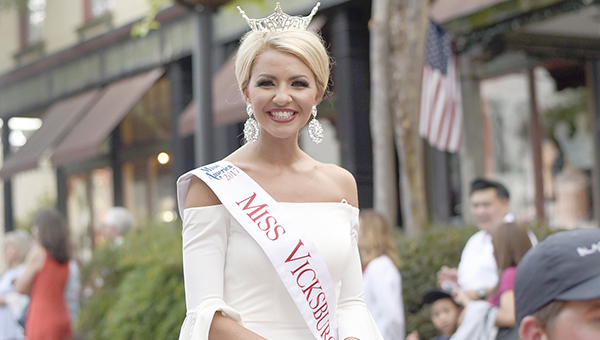 Vicksburg has a good track record of parades through downtown.

Downtown even hosts a Veterans Day Parade and a parade on Memorial Day.

You can add yet another parade to the schedule, as organizations are coming together to send reigning Miss Mississippi Anne Elizabeth Buys, who just so happens to be a Vicksburg resident, off to the Miss America Pageant in style with a parade of her very own.

On Aug. 19, beginning at 10 a.m., Buys will be the grand marshal of a parade through downtown that will feature her, her princesses, contestants from the recent Miss Mississippi Pageant and more.

“We want to send her off to the Miss America Pageant in style,” parade organizer Johnny Reynolds said.

Reynolds said organizers have reached out to bands, including Alcorn State’s band, to see if they would like to participate, but they are also opening the door for others to take part.

“Anyone interested in joining the parade just needs to contact Kim Hopkins at the Downtown Vicksburg office,” Reynolds said. “She has been great in helping us put this together.”

The parade will just be one part of a Saturday’s events focusing on Buys’ upcoming trip to Atlantic City.

The public is also invited to a send-off celebration at the Vicksburg Auditorium, beginning at 3 p.m., that will showcase some of the wardrobe Buys will wear during the Miss America Pageant. Buys will also perform her talent — a dance — during the send-off event.

Buys will actually leave Vicksburg Aug. 29 for Atlantic City and the Miss America Pageant. Preliminaries begin Sept. 6 with the televised finale set for Sept. 10. For more information on the parade contact Downtown Vicksburg at (601) 634-4527.