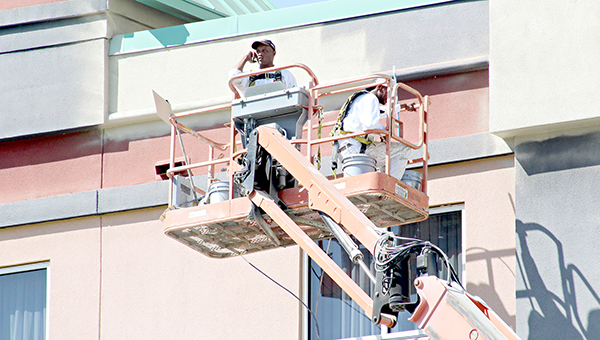 In this 2016 file photo, workers paint the former Diamond Jacks casino after it was purchased by Waterview. An attorney Monday said the company spent more than $7 million in capital improvements in 2016 on the casino.

Waterview Casino officials claim their property is being over-assessed, forcing them to pay more than $8.5 million in real and personal property taxes to Warren County.

Casino officials challenged the recent assessment of a value of more than $25 million on their properties and revenues at Monday’s Board of Supervisors meeting.

They instead claim the assessed value should be much closer to $17 million.

“We have talked about this over the past few weeks and they claim the amount should be much lower,” Luckett said Monday. “At this point, I am going to provide all the information that led to the assessment to the supervisors.”

During Monday’s hearing, Robert Walker, an attorney representing the casino, said the assessed value does not even come close to what the casino was sold for in 2015, or come close to any revenue-based values that could be used to build an assessment.

“We think that value is overstated because there was an acquisition by Waterview, in 2015 that, in our opinion, would set the absolute maximum value for this property,” Walker told the supervisors. “You cannot have property worth more than a willing buyer is willing to pay for it and a willing seller is willing to sell it for. We have an arms-length transaction in 2015 of the $11 million. Of that, $1.3 million of that was working capital and cash. So really, the taxable property at issue from the 2015 acquisition is $9.7 million.”

During their ongoing discussions, Walker said Luckett asked him to provide an income analysis that also might provide more insight into the value.

Walker said using a factor that multiplies the casino’s annual seven times, places the assessed value at $17 million. And, Walker claims, the use of the seven times multiplier is “generous,” claiming others have used a multiplier of 6.4 times.

Even though the factors he provided come up with amounts that are close to one another, Walker said an income review is not the best route.

“Any attempt to look at the cost approach or the income approach, in our opinion, would be inferior evidence to what an arms-length transaction would reveal,” Walker said.

Luckett said he was not aware of any timetable for discussions with the casino, or getting supporting documentation to the supervisors, but said that all of that would be provided to the supervisors in the next few weeks.

Armstrong Flooring, who announced Monday they would be closing their Vicksburg facility in October, also submitted a challenge in writing to the board of supervisors in regards to their most recent property tax assessment.