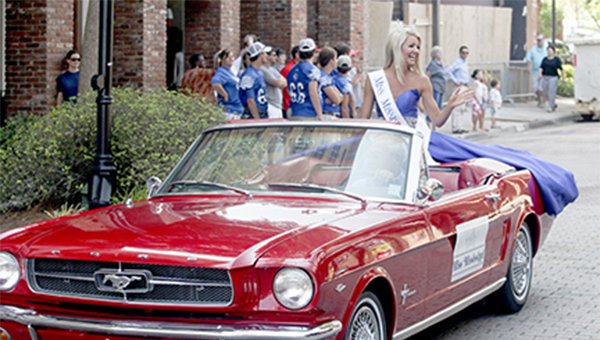 When Miss Mississippi Anne Elizabeth Buys was preparing to compete for the state title, she already had her eyes on the bigger prize. And it is with this continued dedication and determination that the former Miss Vicksburg prepares for the title of Miss America.

On June 24, Buys was crowned Miss Mississippi at the Vicksburg Convention Center and on the Monday following the crowning, she was already on her way to Georgia to have her official Miss America head shot taken.

Preparations for the Miss America Pageant have continued, and Buys said it has been essential to practice time management.

“I can say every hour of my day is accounted for,” she said. “I start my day with about an hour workout and I also run every day.”

On days she practices her dance routine for the talent phase of the competition, Buys said she spends two to three hours in the studio.

There are also mock interviews that will be held one to two days of the week, she said, and these sessions last anywhere from two to three hours.

Evenings are left to pulling together her Miss America wardrobe.

“My Mom and I usually do a lot of that at night.”

In addition to meeting with the Matt Boyd Photography agency in Canton, Ga., Buys also met with a consultant to help her choose the gown she would be wearing during the evening gown competition phase of the Miss America pageant.

As in the past, this year’s official Miss America evening gown sponsor is designer Sherri Hill, Buys said.

Hill is providing production dresses for each of the Miss America contestants to wear at the end of the Sunday night show, but Lasting Impressions is sponsoring Buy’s gown for the evening gown phase of competition.

During the Miss Mississippi Pageant, Buys wore a white form fitting satin dress by Vienna. The gown she has chosen to wear during the Miss America Pageant will remain a secret until the actual competition, but Buys said it is in the “same family” as the one she wore in the state pageant.

“My style has always been very simple,” she said.

During the Miss Mississippi Pageant, Buys was a talent and swimsuit finalist, and for the talent competition phase of the national competition, she will again be performing en pointe to “Viva” by Bond. However, there have been a few choreography changes since the state competition, she said.

The swimsuit Buys will be wearing is also kept secret until she competes in the Miss America Pageant. However, unlike in years past, this year Miss America contestants were allowed to choose their own designers and styles, Buys said.

Along with preparing for the national title, Buys is also fulfilling her duties as Miss Mississippi, and in the process she continues to find ways to use her time wisely.

“You have to have time management, because when you are on the road heading to an appearance, you have to be thinking, ‘what can I do to be getting ready for Miss America at the same time,’ so this is when I listen to the news on the radio and study through my interview notebook.”

“It really helps prepare you for the interview and the job of Miss America,” she said.

For some of the Miss America contestants, traveling to Atlantic City to compete may be their first time on the national stage, but not for Buys.

When she was crowned the 2013 Miss Mississippi’s Outstanding Teen, during her year of reign, it included participating in the national event.

“That was the first year the pageant was back in Atlantic City after being in Las Vegas,” Buys said, “so I was able to go and experience the Boardwalk and I was able to perform on the stage. My class that year got to do one of the productions numbers and that was fun.”

Buys said she thinks this earlier experience could be advantageous.

“The experience that I have had there will definitely help me a lot. You don’t know exactly what to expect never having been on that side of it, but the fact that I have been there and been on the stage and I have seen what it is like for the show to be run definitely helps me a lot,” Buys said.

The 2018 Miss America Pageant competition will feature 52 contestants. Television personality Chris Harrison of ABC’s “The Bachelor” and “Who Wants To Be A Millionaire” will serve as the host.

Sage Steel, host and lead commentator for ESPN’s “SportsCenter on the Road” will be Harrison’s co-host.

Buys will have her judge’s interview and will compete in swimsuit and evening wear, Wednesday, during the first round of preliminary competitions. On Thursday she will compete in talent and Friday, onstage question.

One contestant will also be chosen as America’s Choice, which will guarantee her a place in the top 15, and Buys encourages everyone to vote.

“You can vote once a day online until Sept. 5 at missamerica.org/vote. My picture and name will be on there and you can just click and it will vote,” she said.

Buys is scheduled to fly to Atlantic City on Tuesday, Aug. 29.

For more on the Miss America Pageant and a complete listing of the preliminary schedule, visit missamerica.org/miss-america-competition/.