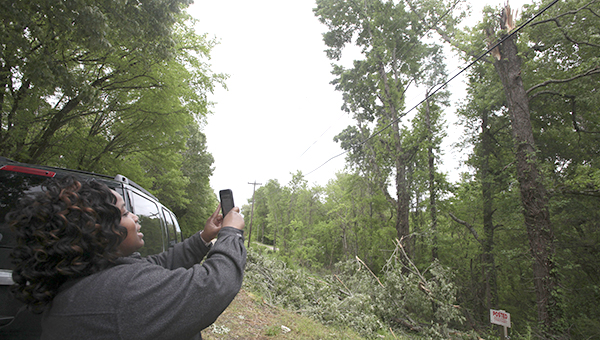 As residents and businesses in Warren County pick up the pieces from Saturday’s storms, the National Weather Service is releasing information on how strong two of the three weekend tornadoes were.

Sunday, a survey team from the National Weather Service documented damage around the county and determined both tornadoes had winds of 115 miles per hour or more and cut miles of damage.

The first, which was reported to have started at 5:04 p.m., cut a 4.35 mile path that started near Walmart, cut across Pemberton Square, before ending past Indiana Avenue near Highway 27.

Winds topped out at 120 miles per hour, and the tornado had a width of more than four football fields. It reported ended at around 5:15 p.m.

This is the tornado reportedly responsible for the severe damages to businesses on Pemberton Boulevard.

The second reported tornado began at 5:08 p.m. at the intersection of Bowmar Avenue and Jeanette Street.

The tornado, which had winds hit 115 miles per hour, was reported to have been 175 yards wide and damaged and area nearly three miles in length.

The survey team said the tornado ended at 5:18 p.m. near the North Frontage Road near Highway 61 and Clifton Drive.

The storm is credited with ripping the roof off of homes, snapping a number of hardwood trees, causing a tree to fall on a home on Ken Karyl Avenue, before shifting northeast, where it caused significant tree damage in the Vicksburg National Military Park.

Following the storms, Entergy reported nearly 8,000 customers were without power.

Each storm registered as an EF2 tornado, which is considered a strong tornado on the Enhanced Fujita Scale. The scale goes up to EF5, which is for tornadoes with winds in excess of 200 miles per hour.

Combined, the two tornadoes were on the ground for a total of 21 minutes but caused damage that will takes weeks and months to recover.

Still early, but damage is significant in city, county