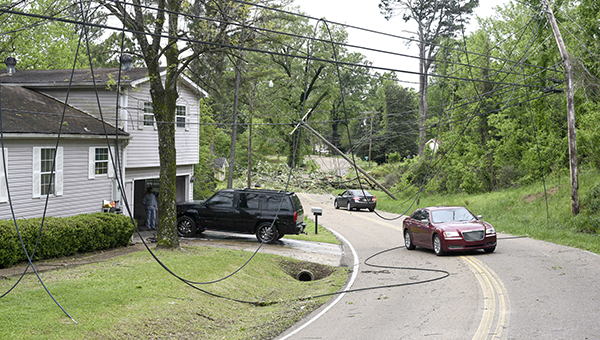 Vehicles are turned around by a downed tree across Cain Ridge Road and navigate through downed utility lines Sunday following a tornado that swept through Vicksburg and Warren County Saturday evening. (Courtland Wells/The Vicksburg Post)

Nearly 48 hours after the first of what is reported to have been three significant tornadoes roared through Warren County, crews with Entergy were continuing to assess just how bad the damage was the county’s electrical infrastructure.

Mara Hartmann, Entergy spokesperson, said crews were limited by accessibility in many areas that delayed the normally quick practice of assessing the damage.

“It has been quite an ordeal,” Hartmann said. “As of this morning (Monday) we had all of our regular crews from here, plus additional Entergy crews from parts of the state not affected by the storms, and 20 contract crews with five members per crew in the county working repairs.”

During their assessment, Hartmann said crews discovered 110 spans of wire down, 76 broken poles that needed to be replaced, 18 cross members damaged and 17 transformers destroyed.

But what started out with nearly 8,000 Entergy customers without power at the peak of the outage, has been worked down to now less than 5,000.

The company also opened a temporary customer information center Monday at the Outlets of Vicksburg, to help those customers still without power.

“It was an opportunity to try to meet those customers needs, face-to-face,” Hartmann said.