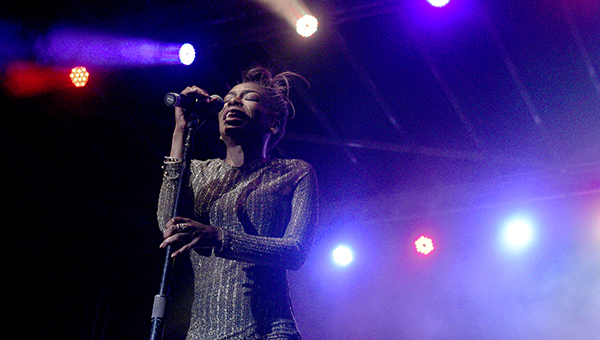 Meet The Press performs during opening night of the 2018 Riverfest in downtown Vicksburg. This year’s event — renamed to VicksburgFest — is scheduled to open Friday downtown. (Courtland Wells | The Vicksburg Post)

What is the opposite of a rain dance?

Whatever it is, officials with the inaugural VicksburgFest are hoping everyone learns the steps and gets to dancing.

This year marks the first year for the event, which up until now has been known as Riverfest. The free downtown event is scheduled to kick off Friday evening with concerts. But, the weather for the next few days does not appear to be cooperating.

“At this point, Mother Nature is going to do what she is going to do. We are just hoping the weather misses us,” Main Street Downtown Vicksburg Director Kim Hopkins said. Hopkins is a member of the event’s organizing committee.

“No matter what, though, we are not cancelling,” she said. “If we are unable to have the concerts, many of the events will be moved indoors.”

Hopkins said the event stage, which will be located at the intersection of Washington Street and China Street, will be covered, and events scheduled for the stage will be cancelled in the event of lightning or if the sound equipment is simply not safe to operate.

“Our main focus will be the safety of everyone,” she said. “That said, we are making plans to move some street performers indoors, and other events to local museums or the parking garage.”

She added if and when those changes are needed, organizers will use a number of social media outlets to inform the public.

Keith Johnson and the Big Muddy Blues Band will go at 5 p.m., followed by Patrick Smith at 7p.m. and Southern Komfort at 9 p.m.

In addition to the renaming of the event, board members have also instituted a number of other changes.

Board chairman Dean Anderson said in an event press release in April, organizers decided to make the event free, eliminating fencing, having the concerts end at 11 p.m. and adding more family-friendly activities.

Many of the changes have come by way of recommendations and comments from those attending the event in recent years.

For more information, visit Vicksburgfest on Facebook or visit riverfestms.com.