Hyde-Smith: ‘… residents of Mississippi’s Eagle Lake are basically on an island’ 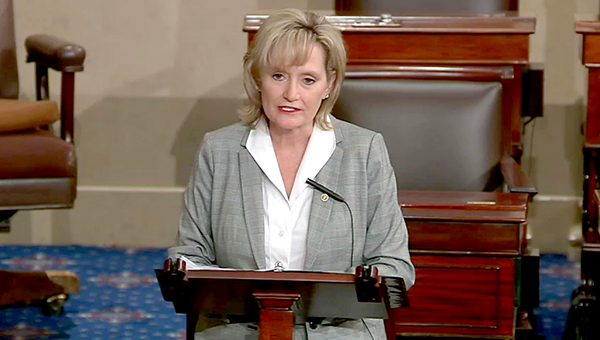 U.S. Sen. Cindy Hyde-Smith (R-Miss.) makes remarks during her maiden speech on the floor of the U.S. Senate Thursday. In her remarks, Hyde-Smith highlighted a number of Mississippi-related topics, including the ongoing flooding in the Eagle Lake area.

In her maiden speech on the floor of the U.S. Senate, U.S. Senator Cindy Hyde-Smith addressed a number of topics including the ongoing flood in the Mississippi Delta, highlighting the hardships being felt by area farmers and those residents in the Eagle Lake area.

Mr. President, I respect the time-honored practice of this body which encourages new members to listen and observe before speaking on the floor. There is value in humility — knowing when to talk and when to listen.

First, let me say it is a great privilege to represent the people of Mississippi in the United States Senate. I am working hard to support the needs of all Mississippians, and to justify the confidence placed in me by the people of my great state.

Today, I rise to speak on several important topics.

First and foremost, to honor Officer Robert McKeithen, a 24-year decorated veteran of the Biloxi Police Department, who lost his life in the line of duty this past Sunday night, May 5th.

Officer McKeithen was described by his Chief as “an unbelievably fine policeman.” He was an Air Force veteran, a husband and a father, who dedicated his life to serving the people of Biloxi, my state, and our nation.

His loss is a tragedy, and a stark reminder that law enforcement officers risk their lives daily to keep us safe. Officer McKeithen’s family, colleagues and friends certainly have my deepest sympathy.

Mr. President, I also rise to speak on behalf of thousands of Mississippians, who have been affected by catastrophic flooding and other natural disasters this year. Their plight and the unmet commitments made to them long ago provide us an opportunity to evaluate how we, as public servants, meet the expectations of the people.

On February 25, 2019, the Governor of Mississippi declared a State of Emergency due to strong storms, torrential rainfall, and severe flooding. Homes, property, businesses, and public infrastructure have been damaged statewide. On April 23rd, President Trump granted a Major Disaster Declaration for the State of Mississippi to help communities recover from these events. I am grateful for the President’s action.

A large portion of west-central Mississippi is experiencing the worst flood on record since 1973. On April 1st, more than 512,000 acres were flooded. A little more than a month later, more than 488,000 acres in this highly-productive agricultural region are still under water, with conditions expected to get worse before they improve. To put that into perspective, these floodwaters span roughly 762 square miles, as we speak.

This flooding is affecting homes, roads, bridges, churches, schools, and the overall health and public safety of area residents. Septic tanks are overflowing. Snakes are in houses. The bloated bodies of drowned deer, bear, hogs, and other wildlife float in stagnant water.

The residents of Mississippi’s Eagle Lake are basically on an island. If someone needs emergency health care, it’s virtually impossible for an ambulance to get to them.

Further, hundreds of thousands of acres of prime agriculture and timberland will suffer significant damage or simply go unplanted this season. The economic impact on agriculture alone will be in the hundreds of millions of dollars.

I observed the magnitude of the flooding and damages first hand in a flyover with the U.S. Army Corps of Engineers a month ago — the situation on the ground is no different today. It is truly heartbreaking to see.

While the full extent of damage can’t be assessed until floodwaters recede and residents can return to their homes, Mississippians — along with those in the Midwest experiencing similar challenges — need relief.

I commend the Appropriations Committee Chairman and Vice Chairman for their continued efforts to reach an agreement on an emergency funding measure to help individuals and communities recover from natural disasters. I am especially grateful for their willingness to consider expanding the scope of the legislation to address 2019 natural disasters.

Federal assistance alone will not solve all problems, and a long road to recovery lies ahead. However, disaster supplemental legislation will provide a very important first step.

Mr. President, the outcome of the push-and-pull over disaster assistance highlights the need for us, as elected representatives, to consistently evaluate the federal government’s performance on delivering promises to the American people.

I cannot speak for others, but Mississippians would like to see more action, and less acting, from their leaders in Washington. Our nation’s environmental review and permitting process for infrastructure projects is the epitome of a flawed and broken bureaucracy in desperate need of repair.

President Trump’s executive orders to expedite environmental reviews and approvals for high-priority infrastructure projects speak to the American public’s frustrations toward Washington and the never-ending bureaucratic red tape carried over from the Obama administration.

I am grateful this administration has taken a strong stance to bring common sense to government operations.

It should not take years and numerous acts of Congress to expand and deepen ports or tackle important infrastructure projects that will generate jobs and add billions to the nation’s economy.

It should not take decades and numerous acts of Congress to complete critical flood control projects that will protect the lives and property of Americans while preventing the need for multi-billion dollar disaster measures.

And Congress should make it abundantly clear that one federal agency should not be able to prevent or delay another federal agency from delivering critical flood protection specifically authorized by the Legislative Branch.

There are numerous examples of this — what most Americans consider bad government — across the country. The catastrophic flooding taking place in Mississippi is a prime example of one agency that has worked at odds with another to the detriment of the public.

So many Mississippians are exasperated by the fact they are losing their homes and way of making a living, all the while knowing it could have been prevented.

The Federal Government has yet to put in place the flood control improvements it has promised area residents since 1941. The fact of the matter is they’ve made it worse. Make no mistake, today’s flooding in Mississippi should not be happening.

Over the past seven decades, significant taxpayer dollars have been invested in the Lower Mississippi River Valley to construct a comprehensive, systematic flood control solution, which today consists of levees, drainage channels, and floodgates.

The last remaining feature of this 77-year effort remains unconstructed due to excessive, over-burdensome regulations and red tape. Because of this, Mississippians are once again losing their homes and businesses; roads and bridges are being destroyed; and wildlife is dying — their habitat lost to contaminated floodwaters.

I bring this to the attention of my colleagues because passage of disaster legislation is vital to my constituents and millions of people across the country. I also call attention to this situation to encourage us all to strive toward doing a better job—a much better job — in delivering for the American people. That’s what our constituents expect, and it is what they deserve.