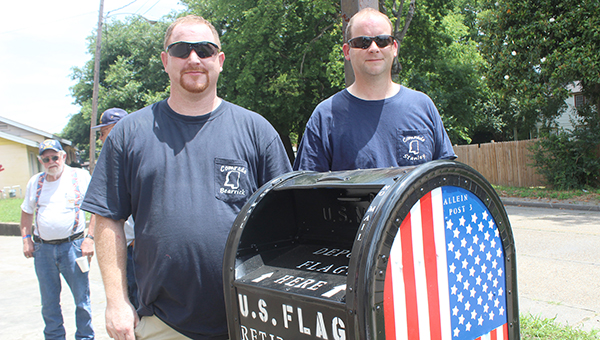 When the Boy Scout troop in Tallulah folded, so too did its annual collection of flags in need of retirement.

Over the next two years, Richard Stanley, executive officer with American Legion Post 3 in Vicksburg, and an Air Force veteran, would go over to Tallulah, check an old mailbox for any flags that might have been donated and then bring them back to Vicksburg.

Back in Vicksburg, those flags were added to the flags collected each year by Post 3 and then properly retired each year.

Now, the old mailbox once used as a collection point in Tallulah has a new home, and a new look, in front of the American Legion Post 3 on Monroe Street.

“The box came from the American Legion in Tallulah, they had it for the same reason that we have it,” Stanley said. “They did not have it painted, so we did it. The only thing the Postal Service said was that it could not be postal blue, otherwise it would be a mailbox.”

Post 3 member and Army veteran Zane Bearrick took it from there.

“It took me about a week and a half to paint it. It was pretty time consuming,” Bearrick said, adding painting is a hobby of his. “A difference from a lot of the ones you see, is this is actually hand-painted; many of them use vinyl instead of paint. The only thing not painted on this one, is the military logos on the front. I’m not that good.”

The box also provides a convenience to those residents looking to donate a flag in need of retirement.

“Before, anyone wanting to donate a flag had to wait for us to be on site. The problem with that is we are only open Monday, Wednesday and Friday for bingo,” Stanley said. “Say you wanted to bring a flag on Saturday afternoon because you changed yours out, you had to wait until Monday. Now, you can bring it up here and drop it off whenever you feel like it.”

In addition to the mailbox, originally built in 1953, continuing to serve as a drop off point for flags in need of retirement, Post 3 is continuing the support of the Boy Scouts.

“Right now we have about 200 flags,” Stanley said. “But we are going to give some of those flags to Camp Hood (Boy Scout camp south of Crystal Springs) for them to use in their retirement ceremony. So, we are keeping the tradition that was started in Tallulah and making sure we support the Boy Scouts.”

As for Bearrick, he’s pleased with how the flag retirement box turned out.

“It was special for me to do this for us,” he said. “Every day I was working on it, I was hoping that it would beat expectations. I think it did.”