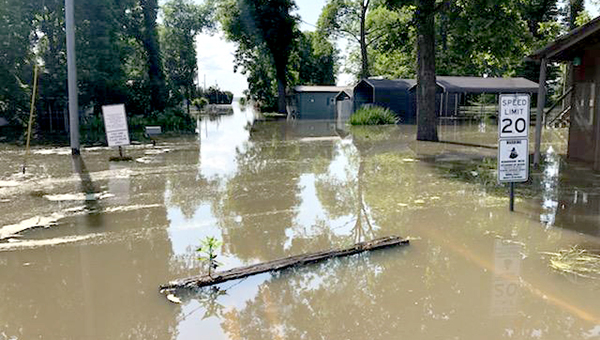 There is no comfort to those residents battling flooding along the Mississippi River or dealing with the flooding in the Yazoo Backwater Area that history is being made in their misery.

Both the duration of the flood on the Mississippi and the level of flooding, particularly on Eagle Lake, are setting marks no one would have wanted or expected, or hope to deal with ever again.

Late last week, forecasters projected the Mississippi River would crest at 51.5 feet, still well below the mark set in 2011, but significant in the fact it means flooding levels in the area will remain above flood stage for more time to come.

In Eagle Lake, water is still rising and seepage along some of the levees is creating more problems for those residents who remain in the area.

“Some of the utilities have been cut off,” Warren County Emergency Management Agency Director John Elfer said. “The power company has been up there, and those houses where it looks like the power meters are going to get flooded, they have been unhooking those.”

In addition to power, Elfer said water service would also be disrupted.

“Obviously utilities are going to be interrupted at some point, it’s just a matter of when,” he said.

Forecasters with the National Weather Service anticipate the crest on the Mississippi River will come June 6. That forecast on Friday was a full foot higher than Thursday’s forecast.

“As for the crest on the backwater, it’s just a moving target,” Elfer said. “It is still coming up in portions. And I had a report this morning that we have some seep water coming in under the levee.”

Elfer said while access to the lake is restricted to residents only, and those assisting residents in evacuating, officials are urging non-residents to stay away and those still deciding to live around the Eagle Lake to leave.

“They need to get out of there,” he said. “We are going to be up there tomorrow, the Sheriff’s Office has been up there all weekend, talking to residents.

“It is one of those things, where if you have stayed this long, you really need to think about going somewhere else,” Elfer said. “The water isn’t going anywhere.”

He said the Mississippi Emergency Management Agency still has housing assistance available to those looking to evacuate. MEMA has set up an office in the Vicksburg Mall to help those seeking assistance.

The office is located in the former Tanner Jewelers location next to Dillard’s.

“We are still giving out food boxes,” Elfer said. “We are going to give those out as long as we have them. Those looking for food assistance should just call the Warren County EMA office.”

While the duration of the flood — both along the river and in the backwater — has hit historic levels, there is no end in sight.

“We are looking at months,” Elfer said. “In 2011 we had high water on the river. But, we didn’t have the flood in the backwater. We actually had a drought that year. None of us have seen the duration like this on the backwater side.”