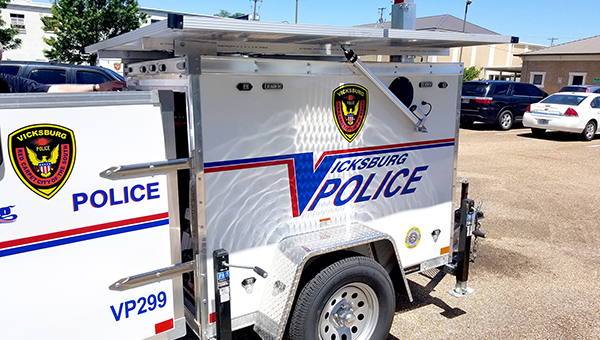 The Vicksburg Police Department recently purchased two solar powered surviellance trailers that can be used to provide security over large events or deter crime in high-crime areas of the city. The two trailers cost an estimated $48,000, which was part of this year’s budget for the department. In addition to solar power, the trailers have battery power, which allows the department to stage trailers in locations for days at a time.

In a matter of moments, officials with the Vicksburg Police Department could have eyes on an event, high-crime or other area of interest thanks to new surveillance systems.

The department recently purchased two mobile camera trailers that provide live footage to officials at the Vicksburg Police Department and City Hall through the use of elevated cameras that provide 360-degree views.

“These can be deployed for days at a time in areas of interest,” Vicksburg Police Chief Milton Moore said. “These are a very effective tool in covering events, such as parades, football games and also observing high-crime areas in the city.”

Moore said the department has already used the technology in providing support of recent graduation ceremonies at the Vicksburg Convention Center.

The cost of the two trailers was $48,000, Moore said, and was included in this year’s budget.

The trailers are primarily powered by solar energy, but have batteries as well. That gives the department the ability to stage the trailers in an area for an extended period of time.

“These are going to be a deterrent to crime in some areas,” Moore said. “They are well-lit and have our police badge and design on them. You cannot miss these.”

In addition to a live video connection, the trailers provide high-definition recording capabilities around the clock.

Moore said officials with the department received training on the equipment and are ready to deploy the trailers when needed.