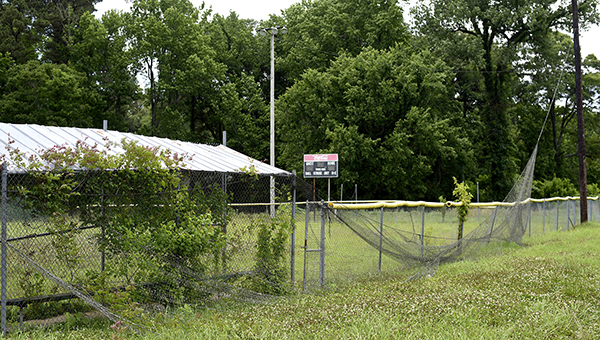 While basic utilities and some support has been provided by Warren County, the Culkin fields have been abandoned for years. In a lease agreement reached Monday, the Vicksburg Warren Athletic Association will clean up and control the fields. (Courtland Wells | The Vicksburg Post)

Tuesday, officials with the VWAA approached the Warren County Board of Supervisors with a plan to create some more by revitalizing an old facility.

During Tuesday’s work session, VWAA President Matt Mallard proposed his organization take control of the Culkin baseball facility. His group would provide routine maintenance of the fields, renovate electrical and lighting, and serve as administrators of the facility to schedule times for teams and organizations.

Mallard said the VWAA primarily wants to use the Culkin fields as a practice facility.

“Currently we play our games at Sports Force, and they have done a great job for us,” Mallard said. “But we simply do not have the space right now to meet the practice demands for our teams.”

Mallard said the VWAA moved its 2019 spring season to the new Sports Force Parks on the Mississippi, with the Vicksburg Girls Softball Association using Halls Ferry Park as its home.

“When you have 35 to 40 teams in our league, and another 26 or so from the VGSA, there is just not enough space,” he said. “That is why we are coming to you today to look at utilizing the Culkin fields.”

The Culkin facility, operated by the county’s parks and recreation board, has not been used in recent years after interest in it dwindled.

Since then, use of the park has been nearly non-existent, with some utilities to the park capped off.

In its proposal, the VWAA would take care of grass cutting of all fields inside the fences, replace broken fences and netting, repair a previous water line break, repair electrical switch boxes and wiring, and install gates to the facility’s entrances.

The county would be asked to continue cutting the grass along the rights of way and areas outside the field fences, continue to pay for utilities, and make any needed repairs to water, sewage and electrical utilities.

“This sounds like a winning situation for all involved,” Board President Richard George said. “We should not worry at all about giving up control of this park. Right now, we have full control and look what has happened to that facility. It looks like a junkyard.”

Board members did urge Mallard to make sure that while the VWAA has control of the park, every organization and team — provided they have the required insurance — be given the chance to use the fields.

“That is no problem,” Mallard said. “We will manage the schedules to make sure everyone has a chance. But we have to have an organization at the point. We know that first come, first serve situations do not work.”

There are five fields at the Culkin facility.

Mallard said that before practices or other events would be scheduled, the VWAA would repair fencing and electrical issues, as well as make sure bathroom facilities are up and running.

While no decision was reached during the work session, the board did instruct board attorney Blake Teller to draft a lease agreement between the county and the VWAA.

The Board of Supervisors’ next meeting is scheduled for Monday, June 3 at 9 a.m. in the Warren County courthouse.