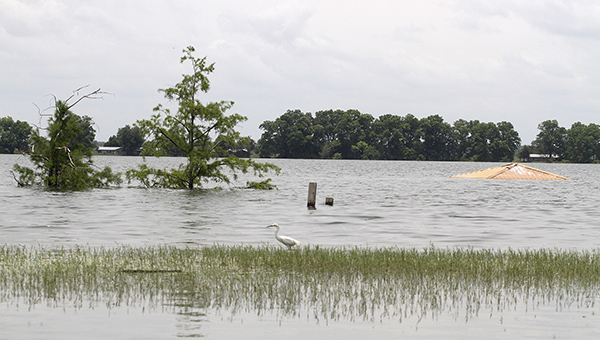 A lone egret keeps watch on what was once the edge of the shoreline on Eagle Lake, while the top of a boathouse is all that remains above water. Access to the area remains restricted as much of the area remains flooded. Only residents and those helping residents, are allowed in Eagle Lake. (Courtland Wells | The Vicksburg Post)

All anyone can do is watch, wait as flooding continues

At a time of year when boats, ski boats and jet skis fill the lake, today only a boat from the Warren County Sheriff’s Office is on patrol.

At a time of the year when residents and visitors alike would line up at Maxwell’s Landing, today only locked doors and windows greet deputies as they patrol the area.

At a time of year when cars and trucks would fill Eagle Lake Shore Road, today only waves from the lake and backwater move back and forth.

As the floodwaters continue to inundate Eagle Lake and other areas along the backwater and Delta, emergency officials are continuing to patrol, watching and protecting property, instead of watching traffic and boaters.

And their time on patrol does not look to be coming to an end anytime soon.

“I’ve never seen it last as long as it has,” Warren County Emergency Management Director John Elfer said. “It’s down a bit, just a few inches, over the past day or so, but they are probably going to have to close the gates in the next few days at Steele Bayou. This water is just going to hang around.”

The decision to close the Steele Bayou gates, which has allowed some of the water to drain from the area, is based on the levels on either side of the control structure. If the riverside is higher than the backwater side, the gates are closed. “There isn’t any magic number,” Elfer said.

While water has been the major problem, the impact the longstanding floodwater is having is increasingly getting worse. One of those problems is now the danger in the water itself, and those things floating in the water.

“Propane takes are becoming an issue,” Elfer said. “Our ordinance requires propane tanks to be secured so that they do not float away. Some residents did not do that.”

Elfer said some tanks have broken away and broken their connections, which is allowing propane to leak out.

“You also have a biohazard in the water, as well as chemicals,” Elfer said. “You’ll see a bunch of barrels floating around, some with chemicals.” He added failed septic systems are also an issue.

In addition, Elfer said water service is being interrupted, and due to leaks, might have to be shut off.

But even as the water remains on the roads and in houses, officials are already to plan for when the floodwaters recede, whenever that might be.

Currently, deputies are continuing to monitor a checkpoint at the only access point into Eagle Lake, restricting access to residents and those helping residents. They are also providing constant both on land and on the water.

Elfer said Thursday the Mississippi Emergency Management Agency had extended temporary housing assistance to those in the affected area. An office set up in the Vicksburg Mall will again be open next week to help those wanting to file for assistance.

The office will open Tuesday and remain open through Friday. Hours of operation will be 9 a.m. to 7 p.m.

Those applying will need to provide address of affected residence and address of where you are currently residing, phone number, Social Security number, pertinent information about your household (i.e. number, names, ages, and any special needs of your family members, etc.), name, address and telephone number of your mortgage company if applicable, name, address and telephone number and copy of policy and any settlement information of your insurance company if insured, copy of a utility bill from affected residence. Other items may be required for completion of application.