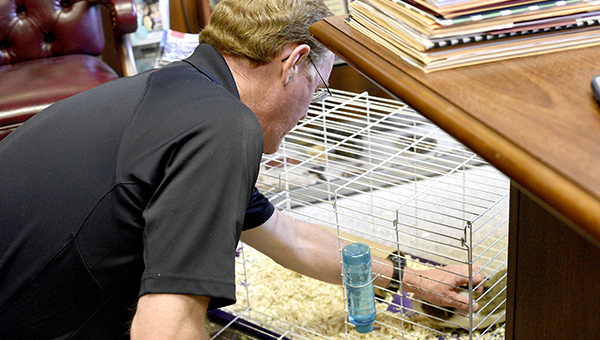 Warren County Sheriff Martin Pace checks on one of the two guinea pigs that currently call his office home Tuesday afternoon. The guinea pigs are just two of the animals first responders and volunteer organizations — like Paws Rescue — have helped rescue from flooded areas in the Warren County area. (Courtland Wells | The Vicksburg Post)

Hundreds of people have been ousted from their homes due to the months-long flood along the Mississippi River and in the Yazoo Backwater Area. Resources through the Mississippi Emergency Management Agency have enabled many to find temporary housing while their homes remain flooded.

But there are hundreds of personal pets and those cared for by residents in the flooded areas that have also been evacuated, while others have had to be rescued.

In some cases, law enforcement agencies have been called into action to pull family pets — dogs and cats — from homes after their owners were forced to quickly evacuate, hoping their pets would be OK.

“There are a few cases where we have had to go back in to the flooded areas, into homes, and retrieve pets from homes where the owners had to quickly evacuate, not having the time or the ability to take their pets with them,” John Elfer, Warren County Emergency Management director, said.

Warren County Martin Pace, who has been on some of those rescues 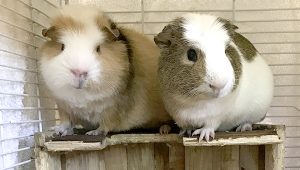 with Elfer and other officials, has two rescued guinea pigs currently living in his office in the Warren County Sheriff’s Office.

“I will admit that I have been spending more time in the flooded areas of the county than in my office these days, but when I have someone in my office, I have to first explain why there are two, fat guinea pigs in there,” Pace said.

Pace said he and others had been asked to return to a home in the Eagle Lake community to rescue other pets that had been left when the homeowners had to evacuate before the road leading to their home flooded over.

When they returned with the pets, they were told there were also two guinea pigs in the home that had also been left behind.

Elfer and Pace said so far they have been able to reunite the rescued animals from flooded homes to their owners, with the exception of the guinea pigs.

“Thankfully, we have not had to call on the Vicksburg Warren Humane Society or the Vicksburg Animal Shelter for their help. Yet,” Pace said.

According to Leigh Conerly, with Paws Rescue, her team is currently working to rescue what has turned into a cat colony in the Valley Park area, with the number of rescued cats at 55 as of Tuesday evening.

“We have been trapping cats for two weeks now,” Conerly said. “We cannot even get back to the area. We have someone who is helping us trap them and then we are fully vetting them.”

Conerly said the organization has taken each of the cats to Animal Medical, where each has been seen by a veterinarian, been spayed or neutered, and either placed with a foster home or is awaiting a foster home.

“These cats are used to country roads,” she said. “So we are looking for places where they would not be in and around traffic.”

Conerly said they are looking for homes for some cats, while others would need barns or shops. “We just need somewhere where we know the cats will be taken care of.”

She added the bill for rescuing and vetting the cats is “in the thousands at this point,” with the end to flooding and potential rescues nowhere in sight.

“If someone would want to donate to our organization — we do this all with volunteers and donations — then they can contact Animal Medical and then they can get to us,” she said.

For more on Paws Rescue and their rescue and foster efforts, contact Animal Medical at 601-636-9410.