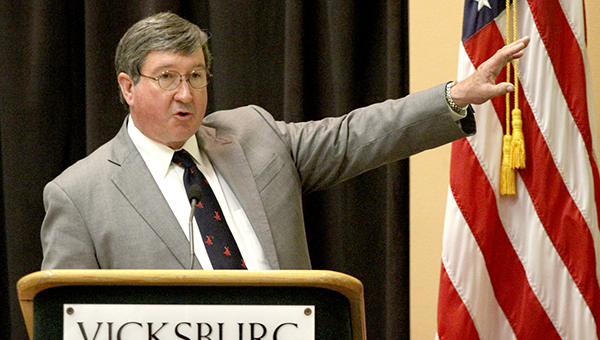 Thomas Holden Jr.’s credentials are lengthy and impressive, and when it comes to understanding the management and workings of the Mississippi River and its tributaries, he is an expert.

That is what made his observations and statements during the Vicksburg-Warren County Chamber of Commerce’s monthly luncheon Wednesday hit hard with those in attendance.

Holden, director of the Regional Business Directorate for the U.S. Army Corps of Engineers, shared statistics, charts and imaging showing the ongoing flood season, which began last September, is setting records throughout the Mississippi River system — and it’s not over yet.

“There’s a lot of people who are suffering tremendously this flood season,” Holden said, as he showed images from the Arkansas, Illinois and other river systems, all of which flow into the Mississippi, where flooding has caused havoc to homes, farms and infrastructure. “This is the worst rainfall, flood event in duration, and the extent of the water, in the history of this country, as long as we have kept records.”

Through his presentation, Holden explained how rain events over the past year in the upper Midwest, combined with heavy snow, which then melted, have created problems throughout the system. Locks in river systems remain under water, while levees have been topped, and some non-federal levees have been breached.

High water in the upper portions of the country has caused navigation issues for barges and tows, which simply cannot safely clear bridges. Agriculture, which has been severely damaged along the Mississippi Delta, has also been dramatically affected throughout the system.

“When you walk out here today, that’s the most water in volume, in history,” he said. “If you took the 2011 flood, which we know was big, and 2008 flood, and added them together, you would not have as much water as has flowed or continues to flow past Vicksburg from September through today.”

In addition to historic water levels and volume, the duration of the flooding is also reaching high marks. Holden is just hoping records are not reached in Vicksburg.

“You can be sure very shortly that the 2019 flood will be the longest duration flood in Greenville, probably won’t make it here in Vicksburg … God I hope not,” he said. “If we go from where we are at to 185 days, then that would mean we would be in the flood for another 2 ½ months.”

Holden said efforts by the federal government and the U.S. Army Corps of Engineers to continually invest in the Mississippi River and Tributaries Project has made a difference, while lack of investment in other parts of the basin has also been shown.

“Thank your elected members for continuing to support the Mississippi River and Tributaries Project, because if it were not for those levees that we have out here, we would be suffering the same fate as you saw in those communities throughout the United States,” he said.

As for investment in the system, Holden did say the flood control plan that includes pumping stations needs to be completed.

“The benefit of having them would mean that there would be 230-to-250,000 acres that would not have water on them right now if we had the pumps,” he said. “That said, having those pumps would not take all of the water out. That would still leave about 330,000 acres inundated.”

He said if the pumps were being used, water would be pumped from the backwater area into the Yazoo River and then into the Mississippi, where he said it would raise the level of the river at Vicksburg by about a tenth of a foot.

“It does make a little difference,” Holden said.

As for now, he said prayers for dry weather throughout the Mississippi River basin are needed.

“I don’t know what your religious persuasions are, if you invoke the deity for help, tell them to send some of that help north and west because they really need it … but don’t forget about us,” he said.